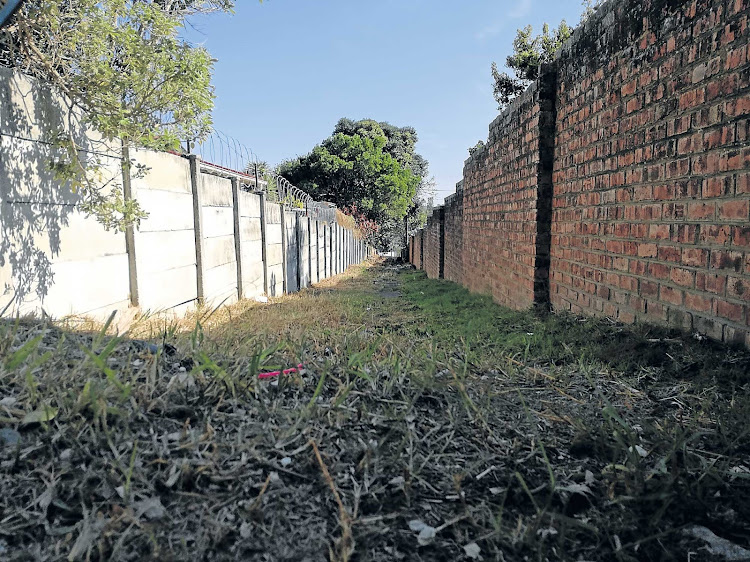 The alleyway which joins Krohn Street with Hofmeyer Street in Cambridge West that has been cleared by BCM after complaints by residents of overgrown bush
Image: Tyler Ridden

Tessa Botha, councillor of Buffalo City Metro’s ward 4 since 2016, believes the main issues facing her constituency are matters of service delivery and that include potholes, grass-cutting and bush-clearing, burst pipes, traffic and illegal dumping.

“In general our roads are in desperate need of attention but there has been an improvement, especially in the Berea area as well as in Cambridge and Cambridge West areas.

“I recently had a commitment from the chairperson of infrastructure whereby he informed me that attention would be given to some roads in my ward,” Botha said.

“Bush-clearing remains a huge challenge due to staffing challenges and the municipality does not have the proper equipment.

“This becomes a problem as it is the perfect hideout for criminals. There also seems to be a huge challenge with burst pipes due to the crumbling infrastructure but this is a general problem all around BCM.”

On the bush-cutting front there has been progress as the small alleyway which runs between houses and connects Krohn Street with Hofmeyer Street in Cambridge has been recently cleared. The path was at one stage so overgrown and became not only an eyesore but possibly acted as a crime conduit in the suburb.

When the Dispatch visited the area earlier this month resident Siyabonga Mzamo said: “I have lost count on how many times I have phoned BCM to clear the alleyway.

“I can’t express how relieved I am that finally work is being done to clear it.”

On Thursday last week the bush that had occupied the pathway had been completely cleared, although there was shrubbery at the end of the alley which had yet to be removed.

Botha said that crime, which “will always remain a major concern”, is on the incline throughout the ward with muggings and break-ins being most prevalent.

Boet Marais, manager at the Mashie Golf Course in Cambridge, said his business, which is a nine-hole golf course next to the Cambridge Bowling Club on Olympic Avenue, had not experienced any vandalism for “a while”.

This is a far cry from earlier this year, when the business office was burgled and set alight, bringing the number of times it had been vandalised to five in just two years.

Marais said vandalism had “always been an ongoing issue” but that for the time being things were quiet, adding that he had been donated a steel storage container which could not be burnt down.

Botha agreed that there had been improvements within her ward. “The intersections between Tapson and Garcia streets and Tapson and Sprigg streets have been resurfaced. It used to be a very bumpy ride along those sections.

“Roofing was carried out at Garcia municipal flats as well as a facebrick wall erected around the place, which has had the effect of giving the area a facelift,” she said.

“The cemetery is getting a little more attention than in the past. Repainting of road-markings are done more regularly. Palisade fencing was done at Union park, which runs along Union Avenue, in Selborne.

“My goals are to drive local issues to improve the ward, to develop a strong and positive relationship with the residents, and to get as many people involved in taking ownership of the areas where they live to maintain or improve the areas they live in,” said Botha.