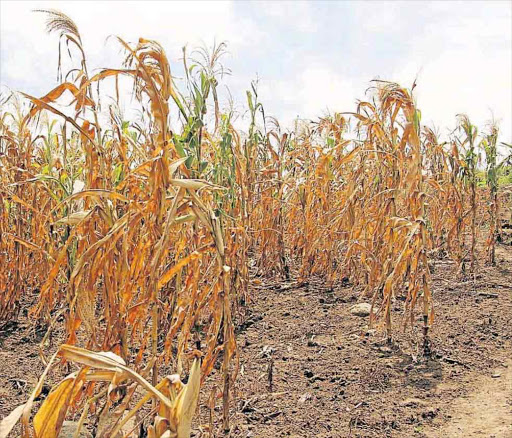 BLITZED: The effects, on non-genetically modified crops, of a herbicide that contains glyphosate Picture: SUPPLIED
The recent controversial spraying of the toxic herbicide glyphosate by the police to eradicate cannabis traditionally grown on the Wild Coast, has after many years of its use, come into the public spotlight.

Apart from the risks posed to humans and the environment, questions have been raised regarding the government’s use of the co-riders of toxic herbicides – genetically modified crops – in smallholder farming along the Wild Coast and other parts of the Eastern Cape.

Glyphosate, the active ingredient in the herbicide used for the “dagga ops”, was originally developed by the multinational agro-chemical and biotech giant, Monsanto, specifically as a weed killer for genetically modified (GM) glyphosate-resistant grains. It was originally marketed as RoundUp.

The herbicide makes GM-crops easy to manage and harvest, and can improve yields, at least, initially. There is however, a financial, environmental and health cost, as weeds start to develop herbicide resistance and yields decline as nutrients are leached from the soil.

Between 2003 and 2008 the Eastern Cape’s directorate of agriculture rolled out a R150-million agricultural food programme in several small villages in the Amathole district as part of the “Massive Food Production Programme (MFPP)”. This included the introduction of a number of GM crops, in particular Bt maize. One agro-chemical company played a central role in this and arranged training and demonstrations in villages.

A subsequent independent review of the programme reported that small-scale farmers were supplied with GM maize, GM cotton and GM soya seeds, as well as herbicide packages from the company.

Sadly, the results of the project speak for themselves.

An external review summed it up as “a highly centralised agricultural project, imposed on extremely vulnerable farmers, incurring significant environmental costs, reduced soil fertility, caused loss of indigenous crop strains, and farmers, who had little or no say in the uptake of these projects, found themselves saddled with debt and no means to pay it off”.

In all cases, farmers complained they were given inadequate information and support, and that corruption among supply contractors was rife, as well as exploitation by unscrupulous operators who sold their produce to commercial markets.

The study concluded that the project did not and would not alleviate local and regional food insecurity or poverty, and was a poor substitute for genuine land and agrarian reform.

It seems as if nothing was learnt from these failures. The same basic mono-crop-GM approach was reincarnated into another government agricultural development project inappropriately named, “The Food Security Programme”.

This project has done anything but improve food security. It has led to considerable declines in soil fertility-making small-scale farmers dependent on very expensive chemical inputs. This makes the future of food very insecure.

In the words of independent sustainable farming expert Tim Wigley: “The Food Security Programme is clearly only benefiting agribusiness and the contractors who supply the mechanisation – for the rest it is bringing great harm.”

The negative impacts of farming with GM maize extend beyond just a decline in soil fertility, they include loss in agricultural and ecological diversity and impose genetic contamination. No less than six recently published scientific studies have found that GM maize contaminated the indigenous seed strain supplies of smallholder farmers in the Eastern Cape. Genetic contamination from the GM insect-resistant Bt-maize was found in fields, home gardens and local household seed holdings in a village where GM maize had been grown from 2001 to 2008.

Despite considerable documented evidence of the health and environmental risks of GM crops and the gang of associated chemicals, such as glyphosate, agricultural development policies continue to bumble on in a shortsighted, clearly non-sustainable manner for agriculture, completely unsuited to vulnerable, poverty-stricken small-scale farmers.

A look at state policy on GMOs is illuminating. Our government, apparently unilaterally, decided to adopt the so-called “Green Revolution” as its approach to agricultural development in marginalised communal areas of the Eastern Cape.

But this “Green Revolution”, a terrible misnomer, is an outdated and largely discredited paradigm of centralised agricultural development totally unsuited to improving the livelihoods of small-scale rural farmers.

In addition, the nutritional quality of the food rapidly declines as minerals are leached from the soil from the chelating effects of glyphosate.

Tons of non-biodegradable agro-chemicals also run off to pollute

surrounding ecosystems or give rise to uncontrollable cross pollination that inevitably occurs as pollen from GM crops infects and crosses with local land races, destroying strains of crops that have historically adapted to local conditions.

The folly of trying to apply this “Green Revolution” to improve livelihoods of poor small-scale farmers in the Eastern Cape has clearly been found to have done nothing to improve the health or food security of some of the most historically marginalised communities.

Rather it serves to promote the profit-seeking agendas of powerful agro-chemical corporations working with their government counterparts.

This is not unique, it happened in the US where the revolving doors between Monsanto, the US government and the Food and Drug Administration are well documented.

From a global perspective South Africa stands out as a pro-GM country. Our legislation and policy governing the use and sale of GM-crops clearly favours agro-industry and pro-GMO industrial farmers over consumers and organic and small-scale farmers.

The Genetically Modified Organisms Act 15 of 1997 (GMO Act) and the GMO Amendment Act of 2001 is the main legislation regulating the production and release of GMOs in this country. These laws have been heavily criticised by the anti-GMO lobby – and not without reason.

The act for example, requires that risk assessment studies are done by corporate funded researchers but the outcomes do not need to be subjected to independent peer-review mechanisms. Nor does the act require compliance with any legal duty to take cognisance of the precautionary principle to establish levels “of risk to human health, the environment and society”.

Perhaps of greater concern is that the planting of GM crops is not a specifically listed activity within the National Environmental Management Act, and therefore an environmental and social impact study is not a mandatory requirement when a new GMO is released. (To date not one environmental impact study has been conducted in relation to GMOs in South Africa).

Further, the act explicitly sets out to uphold and protect all information that a GMO applicant designates to be “confidential business information”, even if this may lead to increased risk to human and environmental health.

The act also protects developers of GMO products from liability for potential GMO damage, and omits any requirement for the labelling of products containing GMO foods.

So where has this pro-GMO policy led us? A recent report by the African Centre for Bio-safety, shows South Africa to be the only country in the world that allows the cultivation of GM seed for the production of a staple food: maize or mielie-meal.

Today 86% of all maize eaten in South Africa is from GM seed, grown on an area of over 2.7 million hectares. More than 75% of this is white GM maize seed from one agro-chemical company.

This shows our entire maize supply is utterly GM saturated. The majority of South Africans are not only eating GM maize without knowing it, or consenting, but have little choice or alternative – even if the products were correctly labelled, which is not a requirement.

This is undemocratic, unconstitutional, and in the words of the African Centre for Bio-safety “smacks of outright food fascism”.

What is strange is that despite global outcries and bans on GMO by many European and almost all African countries, South Africa has embraced this controversial and untested technology with such enthusiasm that today we are the only country in the world whose major staple food, at least, for a huge sector of our population, is genetically modified.

All of this happened in a relatively short time and without comprehensive safety testing. Evidently our government has faith in the risk assessments funded by agro-chemical companies and has chosen to ignore the abundant contradicting independent research results.

One of the few available reports of a South African study (written up in 2011) was by the South African National Biodiversity Institute (Sanbi), whose responsibility it is to monitor the impacts of GMOs on the environment.

The African Centre of Bio-Safety however, has criticised Sanbi’s GMO research report for simply “not reflecting the reality on the ground”.

But things get worse. Recently the GMO executive council (SA’s GMO regulatory body) gave permission for the importation of the Dow Chemical Company’s GM maize, dubbed “agent orange maize”, engineered to tolerate herbicides based on the highly toxic chemical 2,4-D. This is one of two active ingredients contained in the infamous chemical weapon “Agent Orange”, used to devastating effect in the Vietnam war. Exposure to 2,4-D has been linked to non-Hodgkin’s lymphoma, a cancer of the white blood cells. The variety has not yet even been approved in the US.

Many prefer to bury their heads in the sand, ignoring the persistent red flags associated with GM crop farming or perhaps, succumbing to the persuasions of the purveyors, they argue for its “necessity”. But there is just too much evidence to ignore: GM crops carry a high risk and the methods of farming them are clearly unsustainable and particularly unsuitable for small-scale farmers.

Given the current understanding, their widespread release into the environments is irresponsible, undemocratic and poses an unnecessary risk to human health, ecosystems and indigenous crop genetic integrity.

The tragic irony is that we have no real need for these GMOs. There are far more sustainable ways of improving food quality and quantity.

The only way to improve food security, particularly in the face of a changing climate, is through proven sustainable agro-ecological, holistic, organic-based farming systems that use multiple cropping, with crop strains selectively bred and adapted to local ecosystems.

These also take into account cultural food preferences and indigenous knowledge systems. Permaculture, agro-forestry, food-forests, agro-ecology, organic agriculture, are all well tried and tested methods that can guide this.

Unfortunately what is lacking is the political will to promote the kind of rural development planning that will ultimately lead to decentralised self-sufficiency.

As a country we seem to be falling into the predictable trap of neo agro-colonialism, a phenomenon which Steve Druker, in his recent book Altered Genes, Twisted Truth, describes as the corporate drive to control world food production through GMOs by the “systematic subversion of science, the corruption of government and deception of the public”.

Dr Derek Berliner is an ecologist, wildlife management specialist and independent environmental researcher and consultant. He has a special interest in the Wild Coast, where he has spent the last five years working on conservation projects