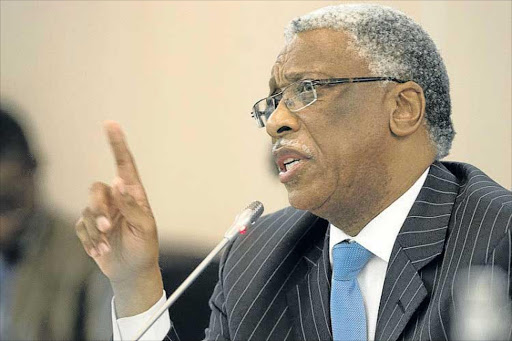 The courts are a critical barometer of what is happening in society. Particular types of crimes being prosecuted or areas of litigation pursued, point to underlying social issues or, more correctly, social failures.

To be fair, the context of Mbenenge’s comment is a discussion around family disputes – like one involving the traditional umgidi or “coming out” ceremony, or the burial of a deceased. These, he says, are quintessential examples of disputes that ought to be resolved within family structures, rather than in court.

The new judge-president agreed to be interviewed on his vision for the division. Mbenenge took up his post late last year, after an hiatus since the August retirement of his predecessor and mentor Themba Sangoni.

Challenges within the court system of the Eastern Cape are well-documented. Tardiness among judges was highlighted by the Judicial Services Commission (JSC), which interviews and recommends prospective judges for appointment.

An official case management system driven by the Office of the Chief Justice, has stuttered along, with pockets of excellence in judicial management but also instances of what Chief Justice Mogoeng Mogoeng has termed “apparent resistance” in Port Elizabeth and Grahamstown. Jurisdictional reform has been implemented throughout the country except in the EC, despite the province being the worst affected by apartheid-era court and homeland boundaries.

One aspect relates to the East London High Court, a circuit court of Grahamstown. Huge infrastructural challenges exist within the lower courts, as well as the Mthatha and Bhisho high courts. For criminal trials, the East London High Court uses the local magistrate’s court. For civil and motion court, it sits in the former courtrooms of the Special Investigative Unit.

Of historical issues, Mbenenge says only that any allegation properly brought to the attention of the province’s judicial leadership, will be investigated.

In his interview before the JSC in October, Mbenenge set out the areas of work he would concentrate on, impressing the commissioners with his willingness to roll up his sleeves and take on thorny issues.

Mbenenge was born in Butterworth but grew up in Mthatha where he matriculated from St John’s College. Both his parents started out as teachers, with his father later going into business.

Vacation work during his matric year sorting out the law library of then Advocate Neilen Locke stirred the young Mbenenge’s interest in law, as did encouragement from Sangoni, then an attorney.

Attending court sessions with his friends every Friday to listen to legal arguments entrenched his appreciation of the law.

He registered for a BJuris degree with the then University of Transkei (now Walter Sisulu University). A Transkei homeland government bursary allowed him to work during university vacations and ensured he got a job as a prosecutor in Butterworth when he graduated. When he applied for LLB studies, the department gave him a bursary and transferred him to Mthatha so he could attend classes after hours.

Advocacy pupillage at the Johannesburg bar followed, with a forced separation from his young family – an early sign of the commitments Mbenenge would make to achieve his goals.

His return to the Mthatha bar heralded an exciting period, a busy cohort of junior advocates working with then senior counsel such as Justice Poswa and the late Louis Skweyiya and Advocate Marumo Moerane SC.

By the time he took silk as a senior advocate himself 11 years later, his practice extended throughout the country although, by now, he had made his base in East London for logistical reasons.

A stellar career reflects a legal acuity with few peers. He was not afraid to take on legally or politically challenging cases. He is highly regarded both within and outside professional circles and his self-descriptors include words like “visionary”, “extrovert” and “demanding”.

Even before he successfully applied for a vacancy on the Bhisho High Court bench in 2015, he appeared to be a shoe-in for appointment. But the JSC was singularly unimpressed three months later at what was described as “untrammelled ambition” when he was interviewed for the position of deputy judge-president (DJP) or head of the Bhisho court.

Then judge-president Themba Sangoni led a litany of questions about his relatively junior status.

However, Mbenenge has consistently pointed out that protocol precludes prospective judges from themselves applying for a job on the bench. He argues that in presenting himself to the JSC for the head of court position, he simply responded to the wishes of “the constituencies” which had nominated him.

He had also sought counsel, he tells me in our interview now, from individuals he respected and who encouraged him to accept the 2015 DJP nomination. The JSC recommended Judge Dawid van Zyl for appointment then and Mbenenge reiterates earlier comments that he had no qualms about the decision.

When Sangoni indicated his intention to retire as JP last year, Mbenenge said he opted not to accept nomination for the position. He believed that, given the calibre of the candidates, one of them would get the nod.

“I was demonstrating I am not a power-hungry person, it’s not about power but about serving people, and if I was to continue serving the people as a junior judge then so be it.”

The JSC rejected all the shortlisted candidates and when the body called for nominations again, Mbenenge allowed his name to go forward.

Mbenenge gave a near-flawless performance in a two hour-long session, sketching a vision for the division, speaking honestly about the challenges, especially around the implementation of case-flow management. He railed against an apparent de facto four-day week in some courts.

Mbenenge expresses surprise at the commission’s turnaround in its attitude towards him by recommending him for appointment at the end of the hearing. He dismisses a suggestion it reflects pre-determined political preferences or Machiavellian backroom deals.

“You must understand there are different interests to be served at a particular time in history…so that may give rise to a perception of subjectivity. I don’t have the slightest view that there were preconceived ideas. When I got to the JSC, I sensed that everybody was of the view that I could make it.”

Mbenenge has made transformation a lodestar of his judge-presidency, but he also speaks passionately about leading the division transparently, with judges “conscientising” one another to ensure “positive, normative behaviour” while dispensing justice “speedily, effectively and efficiently”.

The major idea he wants his colleagues to buy into is that judges are “accountable to those we are serving”.

In a speech delivered to the Bhisho Society of Advocates last month, Mbenenge made the point that judges were also accountable to the professions who in turn accounted to their clients.

“A judge-president is not a slave driver or a headmaster, but part of a division of sober professionals; people who are ready to dispense justice. All that judges want from a leader is transparency…when there is a lack of transparency, you get a measure of insecurity, suspicion and disunity.”

But he agrees that unless the advocates’ and attorneys’ professions also transform, transformation of the bench will not improve.

One of the new JP’s first tasks since taking office was to speak to Grahamstown advocates, warning that if they were not part of transformation, “no one will listen to you”. Shortly after this address, Mbenenge says he received a report indicating that black female candidates had been identified for future pupil training in Grahamstown.

He is also concerned about racialised briefing patterns by attorneys of advocates. In Bhisho, black attorneys invariably enrol customary and administrative law matters. In the East London circuit court, “you see who is responsible for commercial work on the motion court roll; it is lily white”.

He said his plan to properly identify aspirant judges, along with a nurturing environment and attendance of judicial training courses, will go a long way to ensuring that only those who are ready for permanent appointment, end up being interviewed by the JSC.

Rotation of judges across the various high courts in the province from Mthatha to Port Elizabeth will remain a necessary programme to ensure a uniform work ethic and to allow judges to get experience of dealing with a range of cases, especially in civil litigation.

Mbenenge said it never occurred to him to consider elevation to the bench in another division of the high court. “My thinking is that one must plough back into the community that developed one. this society that groomed me and made me a better lawyer.”