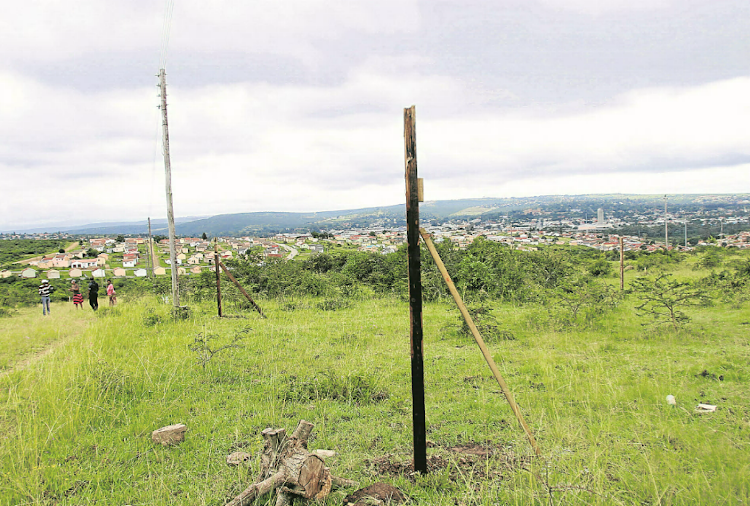 A piece of open land above Ginsberg is shown as land grabs have been taking place in Buffalo City Metro
Image: Michael Pinyana

Circulating in the vortex of public “debate” about land is a veritable literature of concepts and buzzwords, each signifying something particular, but frequently confused with one another.

Key, here, are the very different ideas of land reform and expropriation without compensation.

But before any real debate is possible, we need to agree on what we are talking about, because failing to do so means the conversation becomes incoherent, and is primed for hostility.

Land reform refers to policies designed to alter patterns of landholding, specifically to expand access to land to those who were denied it in the past, or who, for particular reasons, do not have it but desire or need it. This can take various forms – historically, with varying results.

Taiwan’s “land to the tiller” initiative transferred ownership from landlords to small farmers who were working it. It provided displaced landlords with assets, such as factories (recognising they had skills applicable to running businesses), to help drive industrialisation.

In other words, it used property rights and rational economic incentives for a land reform programme that is recognised as one of the world’s most successful.

Communist China went for ideology, collectivisation, victimisation of landlords (who were frequently merely better- off farmers or those who had offended the Communist Party in some way) and bogus science. This was a major reason behind the Great Chinese Famine – quite possibly the world’s most severe – that resulted in between 15 and 45 million deaths.

As it resuscitated itself over the years, China gingerly moved back towards markets and private initiative.

In SA, land reform is a commitment recognised in the constitution. As policy, it has been directed specifically at dealing with the impact of discriminatory laws that restricted access to land since 1913.

This is not to suggest that no dispossession occurred beforehand, but this is the cut-off point stipulated in the constitution.

Expropriation without compensation (EWC) meanwhile refers to something else entirely: the ability of the government to seize the property of private individuals and institutions without offering anything in return.

In SA, this has become linked with the idea of amending section 25 of the constitution – the often-so-described “property clause”.

EWC should not be confused with land reform. This is important, so it should be repeated: EWC and land reform are distinct concepts.

EWC is, at best, a measure proposed to advance the policy.

To oppose EWC is not necessarily to oppose land reform. Rather, as we at the Institute of Race Relations have argued repeatedly, EWC is likely to constitute an obstacle to the success of that latter policy.

The requirement to pay compensation has never been shown to be a significant hindrance to land reform, and to focus on it is to fail to deal with the identified problems.

As the High-Level Panel on the Assessment of Key Legislation and Acceleration of Fundamental Change, chaired by former president Kgalema Motlanthe, observed: “Other constraints – including increasing evidence of corruption by officials, the diversion of the land reform budget to elites, lack of political will, and lack of training and capacity – have proved more serious stumbling blocks to land reform.”

Conversely, it is possible to back EWC with little regard for land reform.

In its implications, EWC stands to extend far beyond land. An amendment to section 25 of the constitution will almost inevitably open the door to expanded state discretion – and compensation-free takings – in other sectors of the economy.

Precedent exists: over the past decade, we have tracked attempted incursions into private property rights in such areas as mining and intellectual property.

Conflating land reform and EWC places a hurdle in the path of rational discussion of the policy choices and their likely implications.

It tries to smear those who raise eminently reasonably concerns about the likely outcomes of a doubtful policy option as being indifferent to historical wrongs.

It implies, falsely, that no path to land reform exists but a path of diminished property protections – although history does not support that.

Both land reform and EWC are firmly on the policy agenda. Nothing is gained for SA by supporting the unfounded idea that they are inextricably tied together.

They need to be separated and each examined and addressed in its own merits.

Terence Corrigan is a project manager at the Institute of Race Relations.