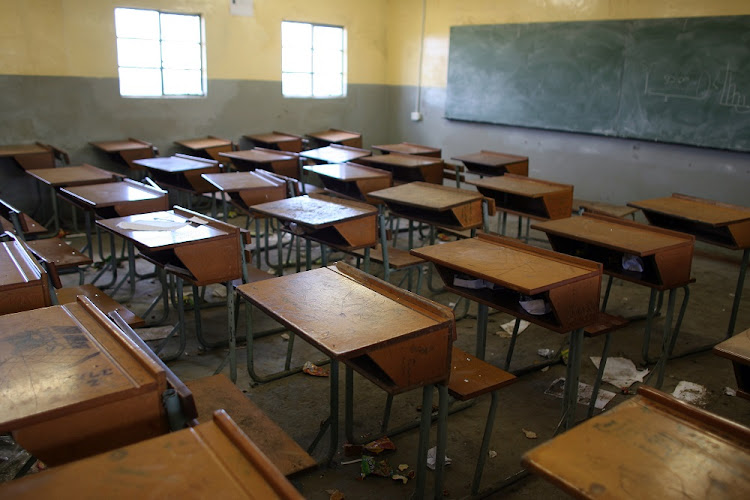 The Covid-19 pandemic and enforced national lockdown has seen the closure of all schools across South Africa.
Image: DAILY DISPATCH

South Africa sent 11.2-million school-going children home because of Covid-19. Only a compelling public health reason such as a pandemic can justify closing schools.

Children have a peremptory, constitutional right to primary and secondary schooling. Interrupting schooling should never be done lightly, especially in a country such as SA that has tragically struggled — without much success — to get even close to the achievements obtained by its peers in the developing world.

If the decision is to close schools, it is of the greatest importance that adequate home-schooling alternatives replaces school-based formal instruction. There is good technology available for online education today. Its backbone is high-speed internet powered by fixed or cellular infrastructure connected, ideally, to a PC or a laptop, though a tablet will also do.

SA has lagged in the provision of a high-speed backbone. Cellphone services are technologically competitive but expensive to the user.

Columbia University, where I teach, went online on March 9. It took a week to adjust to the new system. Teaching is a social encounter. Staring at a computer screen will hopefully be brief. Highly vulnerable to Covid-19 in a city under assault, I proceeded to hole up in my flat and teach my class, conduct research and communicate with colleagues seamlessly, if less efficiently.

It is generally true that in all public health emergencies, children from poor families suffer the most

My youngest daughter takes her final year high-school lessons from home. Zoom has encountered some privacy problems, but a solution seems to be on its way.

There is great concern in the US tha,t despite its vast wealth (if New York City was a sovereign state it would be the 12th wealthiest in the world by gross product), not all children are able to access online education and other services equally. How much more a concern it would be for a developing country such as SA where 13.9% live in informal settlements and 5.9% in traditional huts, and many who live in formal housing have no access to the internet?

In terms of connectivity, one third of SA’s 56.72-million citizens are internet users. Two thirds are found in lower middle-class households with incomes on average of R12,000 a month. Twenty percent of all individuals who have access fall in the 15-24 age category — including senior high-school, college and university students. Broken down by racially defined groups, just more than a fifth of black and coloured people are internet users, contrasted with white South Africans, two-thirds of which have access.

Mobile phones may be the answer

Figures for mobile phone and tablet saturation are much higher and they point to the kind of technology that would be best suited for online education. Of all internet users, 50% have access by way of their mobile phones and 10% by way of tablets.

The opportunity seems clear: families with school-going children living in informal settlements (and poorer areas) should have access to software-ready tablets for online education. As with laptops and mobile phones, tablets also have the advantage of being battery powered and rechargeable in an environment that suffers from erratic electricity supply. Beyond education, mobile phones and tablets are also important for communicating public health risks such as the coronavirus.

While Covid-19 causes illness and death, a fettered economy will also cause death
News
2 years ago

The illustrations show the degree of access people have to communications infrastructure; the internet; female access to the internet; mobile phone subscriptions; and female access to mobile phones. The pictures show many nuances from one country to the next, but the general pattern is clear: mobile (and tablet) solutions for on-line education (and risk communication) in Africa managed largely by women are the way to go.

Jennifer Couzin-Frankel wrote in Science on March 10 that “proactive school closures have been shown to be one of the most powerful non-pharmaceutical interventions we can deploy. It keeps the whole community safe”.

After reviewing the literature, Russell M Viner and his colleagues published an article in the prestigious medical journal The Lancet on April 6, which argued that school closures on their own make a small difference and must only be done in conjunction with other physical distancing measures.

In a document titled Considerations for School Closure, the Atlanta based Centres of Disease Control adds that closing schools should only happen if a government guarantees providing support such as tele-education, alternatives for school-based meals and mental health services for economically and physically vulnerable children.

Now that the threat of a junk downgrade has finally been realised, we can all stop hedging our bets on whether it will or won’t happen, and the ...
News
2 years ago

It is generally true that in all public health emergencies, children from poor families suffer the most. From a socio-ethical point of view, school closures must not only meet public health necessities, government agencies and civil-society organisations in education, nutrition and housing must take active measures to mitigate the disproportionate burden that will fall on vulnerable children.

Unesco is tracking the impact of Covid-19 on education. It estimates that 1.5-billion pupils will be affected by school closures, most of which are enrolled in primary and secondary schools. One hundred and seven countries have implemented national school closures and others, such as the US, have  implemented localised school closures. In the end parents must be super-vigilant about the continued access their children have to the education they deserve.