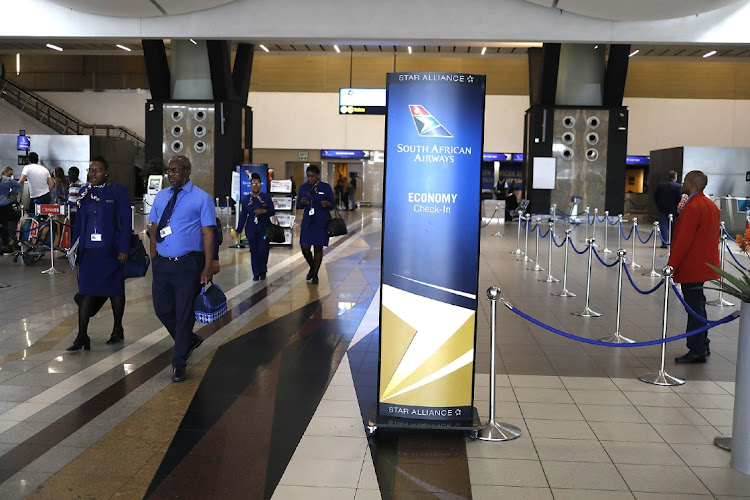 SAA has been out of operation for almost a year. Privatisation of the airline might signal end of the developmental state agenda, says the author.
Image: ALON SKUY

A landmark national decision to relinquish a 51% stake of SAA to private hands puts an end to the long-standing debate around the privatisation of state assets and whether this would be a good move towards building a functional and sustainable national airline.

South Africa, like many developing countries, is embroiled in complicated economic development quandaries characterised by a rising divide between the haves and the have-nots. This has progressed to the point that it is difficult to envisage a SA free of economic stagnation.

While some may correctly or incorrectly attribute this state of affairs to colonial and apartheid composition, I respectfully submit that SA’s socioeconomic woes may have a lot to do with the lost or dormant “developmental state”. The option to privatise, nationalise, or corporatise state businesses is crucial to South Africa’s economic growth and development or continued economic deterioration.

SAA sale is not yet a done deal, says Ramaphosa

President Cyril Ramaphosa said on Tuesday that the deal between South African Airways and the Takatso consortium is not finalised.
News
6 months ago

A road to genuine economic recovery may not be as reliant on international help and the goodwill of foreign investors as has previously been the case. Unleashing developmental state directives may be all that SA requires to retain its economic independence and position itself as a beacon of hope for many African countries. Regrettably, the privatisation route may result in the developing state being pushed to the periphery.

The South African debate on whether to privatise has never been anchored around the pitfalls or benefits that privatisation would yield for the state, but has been about who stands to substantially benefit and who becomes the biggest loser. This move does not only engrave the national government’s posture on what constitutes “recovery” or “revival” of ailing state assets, but charts the way forward on the nature in which the liquidity and governance challenges will be dealt with going forward.

This discourse is primarily characterised by distinct but dominant voices. Though mired in ebb and flows of paradoxes, each of these voices is loud and justified enough to be ignored, for each enjoys a considerable audience in an ideologically fragmented corporate SA.

Pravin Gordhan’s breathtaking manipulation of the Treasury over SAA

One voice is constituted by the conservative proponents of the nationalisation of state resources, and SAA is no exception. In the light of perceived poor state capacity and mismanagement of state enterprises, correlating this ideal bears conspicuous contradictions. Perhaps the infiltration of state machineries by unscrupulous private corporations through state capture could have a lot do with this public anxiety.

The startling revelations at the state capture commission is a further validation of the view to privatise. Through these revelations, the trust deficit gap continues to widen between South Africans and the state. This trust deficit spirals beyond the public perception on government’s lack of capacity to administer its own governance and liquidity affairs and to turn to the private outfits willing to do business with the state.

This sudden “capacity” presented by private and corporate outfits through expressed interests in state entities somewhat serves to confirm the notion that the corporate sector’s interest is centred around benefiting from the state and not necessarily saving these entities from their state of ruin.

Pragmatism rather than dogma welcome in SAA sale

Conversely, under a perfectly normal developmental state, private-public partnerships should be encouraged as a catalyst to complement state capacity, promote sound investments and propel economic growth. However, the current situation forces some to view privatisation of state assets as a grand heist and thus equate the current state to a rendition by by Welter Benson Rubusana in his bid to warn South Africans of a systematic theft by settlers and colonisers ‘Zemnk’ iinkomo magwalandini’, loosely translated ‘Your cattle are being stolen, you cowards’.

The predicament in this analogy though, is who gets warned and against whom? Eyebrows are raised when the supposed victim becomes an instant beneficiary of ill-processed wealth. Though the latter statement may sound rather subjective, the state capture saga is a perfect mirror from which this view is derived.

Recently, emerging economies have been fascinated with privatisation, sometimes for political and economic ideological reasons, and other times simply to enhance state liquidity. However, in SA, privatisation is arguably an antidote to “promote” sound governance in state enterprises. It is on this basis that open critics of the privatisation of state resources see the process as avoiding the real fundamental issues underlying the failure of state entities in SA, instead advancing quick and unsustainable solutions to structural governance shortcomings.

SAA deal is the next best for all parties

That is, if the deal — which was hammered out behind closed doors — can fly at all
News
6 months ago

Despite the apparently elaborate scientific methods used to arrive at privatisation as a “sustainable” option for dreadful state companies, the process looks to be arguably fraught with pain and impaired due diligence. If governance and maladministration are the correct diagnoses for the awful state of public institutions, corporatisation may be all that SA requires to turn its fortunes around rather than ceding the majority share to private partners.

Instead of addressing the awful status of state resources, corporatisation might be used as an alternative. Should we presume that maladministration vanishes when the state relinquishes its interest to private hands?

On the contrary, I contend that privatisation does not always result in increased efficiency and profitability. The challenge in reforming public enterprises is not in adopting the corporate form, but in attaining economic efficiency by embracing the corporate structure on the one hand and preserving public ownership on the other. Corporatisation would not only enhance the administration of state businesses, but it would also protect the state against subtle state capture.

Tracing the developmental path of SA cannot be separated from a comparative examination of postapartheid public policy orientations under the banner of a developmental state. The very first political administration cohort into the government of national unity can easily be forgiven as so many new blueprints had to be introduced in replacement of apartheid policies, and like greenhorns, a lot of trials and errors had to be the order of the day.

State’s 49% stake in SAA could be further diluted

However, it should be emphasised that the second government vehemently opposed privatisation and acknowledged that parastatals would continue to play an important part in the economy. The second administration’s strict hegemonic attitude was concentrated on increasing state capacity through the establishment and strengthening of functioning state organisations while integrating the private sector through black economic empowerment and related initiatives.

As it now stands, the current government cohort’s promotion of privatisation is an implicit rejection of the establishment of state hegemony and the transfer of power to private hands. Though there is no set or universal strategy for establishing a state, increasing state capacity captures the kernel of growth in emerging countries. In a truly developmental state, public ownership is seen as the foundation for fostering high social ideals such as income equality and human development through a capacitated state.

It is an unavoidable conclusion that the present trend will lead to a leaner state over time. As if the superficiality of the South African developing state wasn’t enough, the onset of privatisation threatens the already disappearing traces of the developmental state.

Privatisation is often associated with neoliberalism in emerging economies since it attempts to reduce the involvement of government in an activity or increase the role of the private sector in asset ownership. It is very troubling that SA takes comfort in taking the neoliberalism route in the midst of an awful state of economy.

SAA has a new strategic partner

SA Airways has a new strategic partner that will own 51% of the airline.
News
7 months ago

The neoliberal position that the developing nations’ economic difficulties were caused by excessive and undirected state involvement in the economy, as opposed to the supremacy of free markets in rich countries, is a diagnosis that emerging economies must carefully evaluate. The heterogeneity and uniqueness of the South African economy should provide impetus to the character of the country’s public policy decisions, with less reliance on global trends that are purposefully meant to push particular economic and political ideologies.

What will it take for Africa, and particularly SA, to use uniquely African and South African answers to South African problems? Relinquishing the majority state assets to private hands is counterproductive and runs opposed to the developmental state idea of balancing economic growth and social development via the deployment of state resources and power to combat poverty and increase economic possibilities.

Privatisation of public resources will result in the demise of the developmental state and a further widening of the divide between the haves and the have-nots.