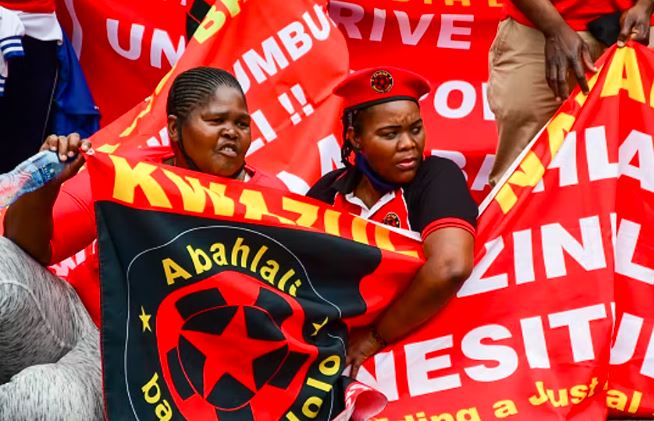 South Africans have learnt that democracy isn’t simply a destination that they reached with the formal end of apartheid on 27 April 1994. It is also a lifelong quest to keep up the pressure against corruption, and on elected representatives to deliver on their promises.

A significant proportion of political contestation comes from tussling and lobbyists for a variety of single-issue organisations. The environmentalists, for example, take up issues such as management of radio-active waste; fossil fuel power stations, and air and water pollution. Protests, street marches, media polemics are all part of this.

Defend our Democracy Campaign is the latest organisation to join a veritable ecosystem of NGOs that range all the way from Abahlali baseMjondolo Movement (Shack Dwellers’ Movement) to Afriforum. Abahlali focuses on street-by-street organisation of informal settlement residents to defend their rights and improve their lot. Afriforum is a civil rights organisation that “mobilises Afrikaners, Afrikaans-speaking people and other minority groups in South Africa and protects their rights”.

TOM EATON | The right stuff? The ANC has killed SA’s appetite for democracy

Some of these NGOs, like the Helen Suzman Foundation, focus on litigation, hence the conversation about “lawfare” – referring to the judicialisation of politics – having replaced warfare or elections.

This extra-parliamentary politics help form part of a deeper defence that, in my view, will give democracy more resilience in South Africa.

Ordinarily, democracies depend on voters floating between parties. A governing party or coalition that is ineffective or fails to improve the electorate’s livelihoods loses votes, and an alternative party or coalition comes into office.

But in South Africa, this is unlikely to happen in the foreseeable future. This is because the ruling African National Congress (ANC) still holds close to 50% of the vote nationally – admittedly well below the 60% plus it had earlier – combined with the fact that the official opposition, the Democratic Alliance shows scant signs of growing nationally from 20% to over 50% of the votes.

Instead of switching their votes, voters are opting in increasing numbers to abstain and not vote for any party.

What this means that the heavy lifting when it comes to democracy will increasingly depend on NGOs, constitutional litigation and street protests. Building up pubic pressure and sustaining it, using rights to make representations to parliamentary portfolio committees, are among the ways that NGOs without state power make their presence felt.

LISTEN | Human rights: Some humans are more equal than others in SA

While many South Africans don’t feel that their basic human rights are protected and prioritised, Africans living in our country, our neighbours, say ...
News
2 months ago

The other reason that these organisations, and approaches, have the potential to keep democracy alive in South Africa is that they’re emboldened by the arrangement set up in 1994. The most visible optics of the political earthquake that year was the transfer from white minority rule to black majority rule. But equally important was the termination of a century and a half of the British doctrine of the sovereignty of parliament – parliament, having replaced the king, assumes all his powers. Both British colonies and Boer republics in South Africa had followed this doctrine since the nineteenth century.

Instead, South Africa transformed itself into a constitutional democracy. That is, the Bill of Rights of the Constitution became supreme. Even the government of the day and its laws must be under the constitution, or a law itself can be ruled to be illegal.

Here, South Africa drew upon US and Indian antecedents.

But this system also has its drawbacks.

A comprehensive Bill of Rights which can be brought to life through the courts, brings with it its own problems.

Firstly, the tendency among South Africans to turn to the courts in pursuit of change, or what’s known as “lawfare” . This is problematic because the result is that the losing side tends to blame the judiciary, not their political party rivals. This structuring of political conflict brings its own tensions, which needs to be managed.

What would Hani make of South Africa today? Spoiler alert: not much

As we celebrate the extraordinary efforts of apartheid struggle heroes, we need to ask: have we done them justice?
News
2 months ago

South Africa is now nearing a peaking part of its political cycle. This year, the African National Congress is scheduled to elect both new provincial and national leadership. All eyes are watching the balance of power between President Cyril Ramaphosa and his rivals in his party. In 2024, the country will hold a general election, with simultaneous voting for both parliament and each of the nine provincial legislatures.

NGOs and the rest of civil society can heap up the pressure against, for example, ANC leaders charged for corruption, being re-elected by their faction to ANC offices and structures.

So far, opposition parties do best in municipal elections, and the ANC does best in general elections. But either way, South Africa can expect to hear a lot more from the new Defend Democracy organisation, plus all the established NGOs. The country has much to think through on this Freedom Day, 27 April.

This article was first  published in The Conversation.