'Insurrection' talk meant to justify deployment of soldiers on the streets, says firebrand leader of the red berets 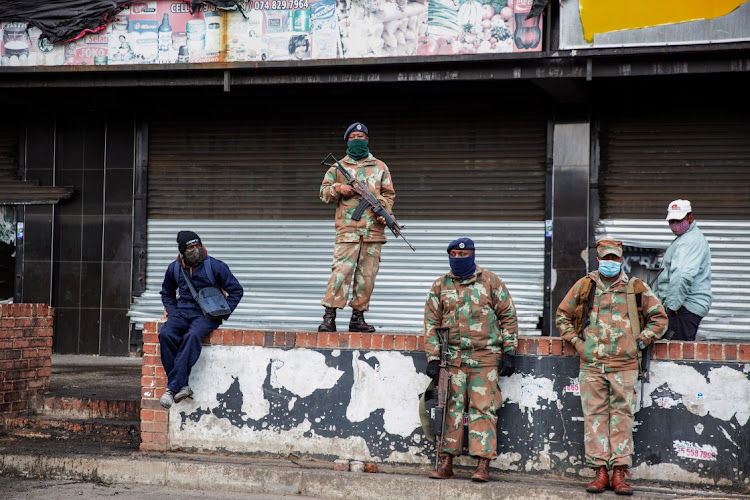 Soldiers were deployed in parts of KZN and Guateng during last week's riots and looting.
Image: James Oatway/Getty Images

EFF leader Julius Malema has joined the fray about the characterisation of last week's looting spree and violent protests that rocked Gauteng and KwaZulu-Natal.

There has been a raging debate about whether or not it was correct to brand last week's events as an "insurrection".

The debate took a turn at the weekend when defence minister Nosiviwe Mapisa-Nqakula on Sunday contradicted President Cyril Ramaphosa, saying there was "no evidence of insurrection".

That was before she made a dramatic U-turn following public pressure, saying on Tuesday that Ramaphosa was right in his assessment.

Malema snubs Ramaphosa's meeting on looting, says ANC must solve its own problems

'I don't participate in rubbish,' says Julius Malema as he snubs Ramaphosa meeting on violence and looting.
Politics
10 months ago

Malema has since also offered his view on the debacle during an interview on Kaya FM on Tuesday afternoon.

According to Malema, there was no insurrection - he said they were "protests" fuelled by volatile ANC internal politics.

But Malema said he understood the push to brand the protests as an insurgency, to cover-up on the government's deployment of the army to quell the violence.

Malema insisted that last week's riots were typical of any protest that had ever taken place in SA - accompanied by fires, looting and violence.

"What they did they went to take soldiers and put them on the ground, that is why they call it an insurrection because they want to justify why there are soldiers on the ground.

"It is not an insurrection, it is a protest whether there is looting or fire. All of protests have fire, all protests have looting by the way, even in 1976 bottle stores were raided," he went on. "Every revolution has got elements of destruction to property and therefore you cannot say because there is looting it is illegitimate.

"Soldiers are on the ground, we are told it is an insurrection and a coup but it is none of the above. The real problem here is that the president bought being a president ...

Malema said this was the reason the administration of the day would resort to unleashing the army to quell protests because it did not have "popular support" on the ground.

"The people should have risen in the defence of their government but because this is an illegitimate government which bought its presidency, people did not stand up to defend it."