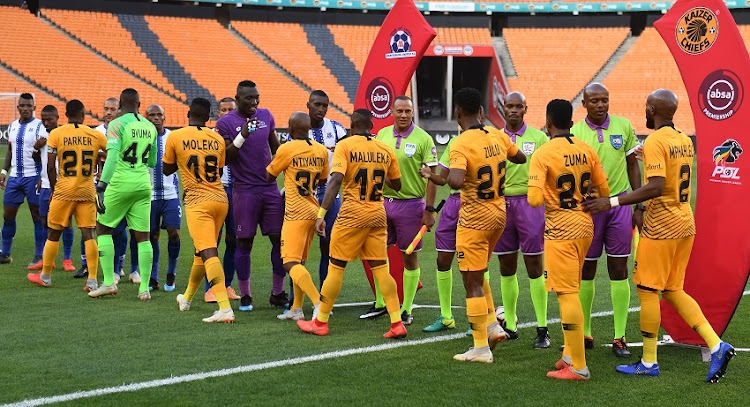 Officials and players during the Absa Premiership match between Kaizer Chiefs and Maritzburg United at FNB Stadium on March 09, 2019 in Johannesburg, South Africa.
Image: Gallo Images

Such has been the inconsistency of the teams at the top of the table that the form side in the Absa Premiership over the last six matches has been seventh-placed Kaizer Chiefs.

But it is still likely they have left themselves with too much to do in the push for the league title‚ lying a full seven points behind leaders Mamelodi Sundowns and having played a game more than the defending champions.

With just six games to go‚ Chiefs’ marked improvement under coach Ernst Middendorp will likely get them a top four finish at best in what has been another season of turmoil at Naturena.

Chiefs and Polokwane City are the only unbeaten sides in their previous six matches‚ while they have also scored the joint most number of goals‚ 10.

“The chance‚ had we won (against SuperSport United)‚ would have been a lot bigger to come a lot closer but at the same time you know Orlando Pirates has to go to Black Leopards and you are not winning there easily‚” Middendorp said after Friday's 1-1 draw at SuperSport.

Kaizer Chiefs and SuperSport United both had their hopes of a late surge at the Premier Soccer League title handed a blow when they played out a 1-1 ...
Sport
2 years ago

It is a valid point‚ because those above them have been dropping a large number of points in recent games.

Sundowns and Pirates have both only taken nine points from the last 18 available‚ while Cape Town City and SuperSport have been marginally better with 10.

BidVest have managed only seven.

It has created the most exciting title race in recent times‚ with all teams from the current leaders Sundowns to Chiefs in seventh still in with a chance‚ with nobody able to put a run of wins together.

At the foot of the table‚ Baroka have been the worst performing side over the previous six games‚ taking just five points and they are now in serious relegation strife.

They are not alone though with Bloemfontein Celtic‚ Chippa United‚ Maritzburg United‚ AmaZulu and Black Leopards all managing only six points from the last 18 available.

Cape Town City’s title hopes took a dent when they were held to a 0-0 Absa Premiership draw by Polokwane City at the Cape Town Stadium on Friday ...
Sport
2 years ago

The Premiership run-in: How the league title contenders shape up

The Absa Premiership campaign is heading towards to an exciting climax with several teams all with a mathematical chance of winning the league title.
Sport
2 years ago