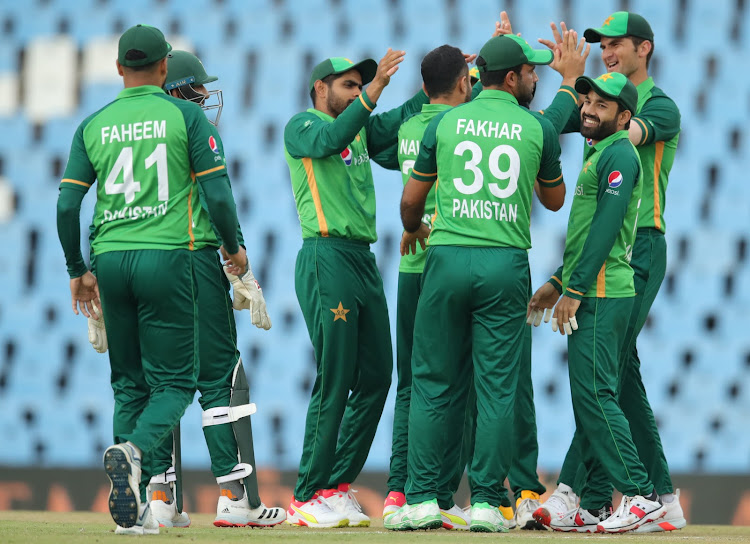 Mohammad Nawaz was key for Pakistan as they claimed the third and final ODI match.
Image: Samuel Shivambu/BackpagePix

Pakistan dished out an all-round performance to defeat South Africa by 28 runs in the final ODI at SuperSport Park and claim the series 2-1 on Wednesday.

The visitors' batsmen and bowlers showed determination as they dominated the Proteas‚ who did not have answers to most of the questions they were asked in Centurion.

Captain Temba Bavuma chose to bowl after he won the toss but Pakistan responded with a total of 320/7 that proved to be a steep mountain to climb for the Proteas‚ who were bowled out for 292 after 49.3 overs.

The Proteas were initially outdone by left-arm spinner Mohammad Nawaz‚ who claimed the important scalps of Janneman Malan‚ Bavuma and Heinrich Klaasen at the top of the batting order.

Nawaz was supported by Shaheen Shah Afridi with the wickets of Aiden Markram and Daryn Dupavillon while Usman Qadir chipped in with that of Jon-Jon Smuts.

The South African batsmen who presented some resistance were Malan‚ with an impressive knock of 70‚ and Verreynne (62) and Phehlukwayo (54)‚ who combined for a stand of 108 off 99.

Proteas skipper Temba Bavuma believes the versatility in the batting line up gave his side a lot of confidence  as they prepare for the series ...
Sport
2 weeks ago

The Proteas’ chase got off to a shaky start with the loss of Markram (18) and he was later followed by Smuts (17) as Pakistan made their intentions clear.

Then Nawaz rocked the South African middle order with the wickets of Malan‚ Bavuma (20) and Klaasen (4) in quick succession.

After the early loss of Markram‚ Smuts‚ Malan‚ Bavuma and Klaasen‚ Verreynne and Phehlukwayo went about the rebuilding job but their promising partnership was broken in the 44th over.

This was after Verreynne was caught in the deep by Qadir from the bowling of Rauf‚ and things went further downhill as Phehlukwayo‚ Hendricks (1)‚ Maharaj (19) departed in quick succession.

During their batting innings‚ Pakistan dominated the Proteas bowlers in the early stages with Fakhar Zaman sparkling with his sixth ODI century and the second in a row in this series.

South Africa have suffered a blow to their batting line-up after it emerged that key top order batsman Rassie van der Dussen will not play in the ...
Sport
2 weeks ago

Fakhar was followed by his captain Babar Azam‚ who ended six runs shy of what could have been his 14th ODI century‚ and the other main contributor to their scoreboard was opener Imam-ul-Haq with 57.

The other impressive aspect of Pakistan with the bat was that they managed to construct partnerships like the opening stand of 112 between Fakhar and Imam-ul-Haq.

The other one was 94 between Babar and Fakhar‚ and 63 between Babar and Hasan Ali. They were destructive in the closing stages as they scored 56 runs in their last three overs‚ which dealt the Proteas a huge psychological blow.

Keshav Maharaj ended with three wickets and followed by Markram with two‚ and Phehlukwayo with one.