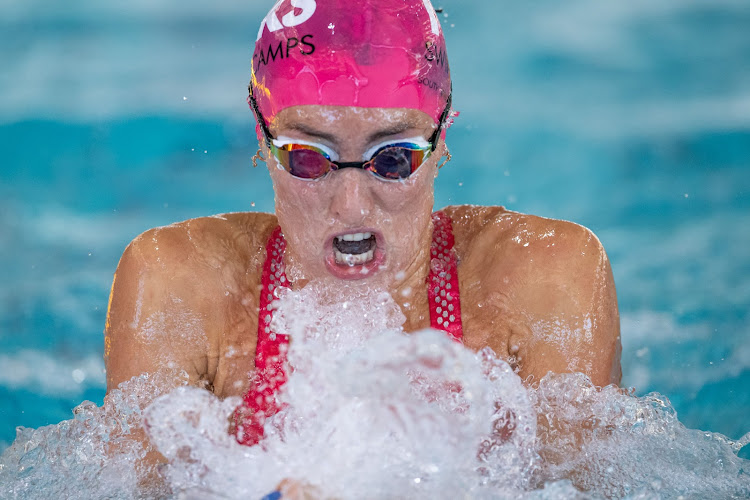 Gauteng swimmer Tatjana Schoenmaker showed her class in the Newton Park Swimming Pool as she set two national records and claimed gold on day one of the SA Invitational Aquatic Championships on Wednesday.

Having set the 50m breaststroke record earlier in the day, she eclipsed the feat later to finish in 30.32, shaving a tenth off her 30.42 time in the heats.

It was a podium lockout for Gauteng as Lara van Niekerk (31.03) and Caitlyn de Lange (31.87) followed their teammate to the finish.

Schoenmaker, who said she had been working on her speed in the event, hoped it would show in her speciality event, the 200m breaststroke later this week.

“The challenging part will be the 200 because it is four laps, so it will be a bit longer than 30 seconds.

“The 50 is just a nice race and we are super lucky to have it on the first day just to get rid of the nerves,” the Tuks swimmer said about her record-breaking performance.

The Western Cape-based Le Clos, who had pressure from the young guns behind him, was satisfied with his performance to get his competition started.

“I’m happy with that. Because there was a bit of pressure from the youngsters, they’ve been beating me in recent times, so it’s nice to start off with a good, solid performance.

Olympic hopeful Tatjana Schoenmaker signalled her intentions on day one of the SA Aquatics Championships as she set a new national record in the 50m ...
Sport
2 weeks ago

Le Clos said the performance gave him a lot of confidence for the days ahead and he was happy to be back and swimming in Nelson Mandela Bay.

“Just a pity that there is no crowd here. There is usually a nice group of people who come out to support.

“The atmosphere was better than I thought. I was worried it would be dull because there was no crowd, but the swimmers [here] made some noise, so it was nice.”