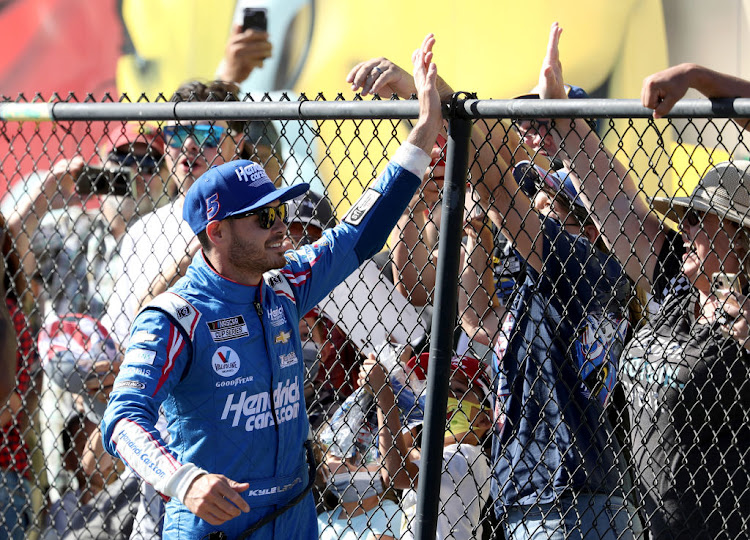 Kyle Larson won for the second straight week on Sunday when he got the overtime victory in the Toyota/SaveMart 350 NASCAR Cup Series race at the Sonoma Raceway road course in Northern California.

For the second week in a row, Larson's win came in dominating fashion as he led a race best 57 of 92 laps.

And it kind of surprised him.

“I thought I would be OK today,” Larson said, “but I just didn't know how I would race. I don't think any us really knew with no practice. But our car was really good there. Can't say enough about it.”

He added two more stage wins to give him a series best – by far – 11 on the season.

The victory was the Hendrick Motorsports driver's third of the season, tying him with Martin Truex Jnr of Joe Gibbs Racing.

That victory for the native of nearby Elk Grove comes a week after he won the Coca-Cola 600, a race in which he led 327 of 400 laps.

It was not easy. Any road course is not easy. Just trying to keep it on track is tough

“It was not easy,” Larson said.

“Any road course is not easy. Just trying to keep it on track is tough.”

Larson's win was his first on a road course during his career.

Of winning in front of home folks, he said: “Northern California, this will always be home to me even if I live way out on the East Coast now.”

Chase Elliott, Larson's teammate, who won at the Circuit of the Americas road course two weeks ago and was second at the 600, finished second. The margin of victory was .614 seconds.

“I wish I knew,” Elliott said when asked where Larson was better.

“I would have tried to give him a little better run.”

While Elliott has become a bona fide road racing ace, he has not yet won at the 12-turn Sonoma circuit.

“I feel we were a lot better there at the end than at the beginning and definitely the best I've ever been here at Sonoma in particular, so pleased with that,” he said.

Kyle Larson, who was suspended by NASCAR and fired by his team Chip Ganassi Racing for using a racial slur during a live streamed iRacing esports ...
Sport
7 months ago

Truex, looking to win his third straight at Sonoma, finished third despite having to start the race in the 19th position.

“I didn't have the shorter run speed,” Truex said.

“The really long runs was really our only chance. All those cautions at the end just killed any chance we had.”

Joey Logano of Team Penske was fourth, with Kyle Busch of the Gibbs team rounding out the top five.

It looked like taking the checkers would be easy for Larson but a few wrecks way back in the field with five and three laps to go brought out yellow flags. The first abrogated his three second lead and set up a restart with three laps to go.

On that restart, Larson easily pulled away, until a second wreck quickly occurred to set up overtime. After the final restart, Elliott, who has won six road races in his career, stayed close but could not pass.

NASCAR indefinitely suspended Eddie D'Hondt, the spotter for the No. 9 Hendrick Motorsports team, on Wednesday after learning more about his arrest ...
Sport
3 weeks ago

A wreck with less than 20 laps to go cost a number of fast cars, including those of William Byron and Kevin Harvick, chances to win.

Anthony Alfredo and Scott Heckert were sent to the rear of the field for the start. In addition, Alfredo's Front Row Motorsports crew chief, Seth Barbour, was ejected from the track for failing tech inspection. Heckert was penalised for an unapproved adjustment on his Live Fast Motorsports car.