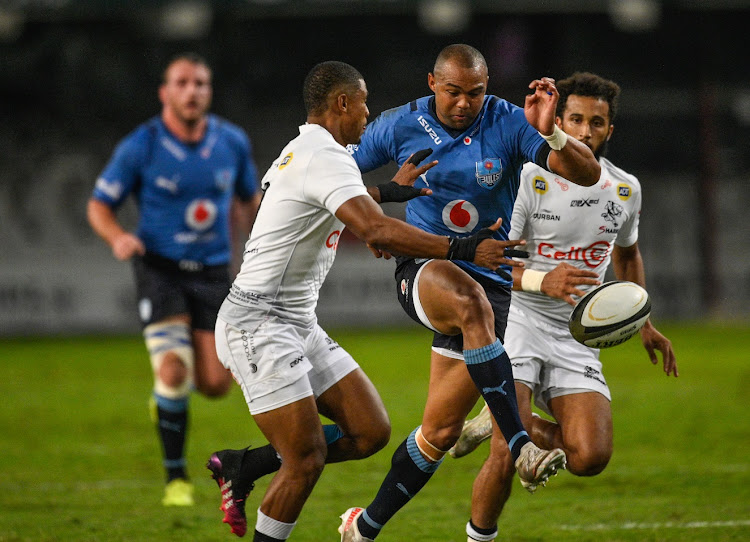 Cornal Hendricks of the Bulls during the PRO14 Rainbow Cup SA match against the Sharks at Kings Park in Durban on June 12 2021.
Image: Christiaan Kotze/Gallo Images

The Bulls have booked their place in the cross-hemisphere Pro14 Rainbow Cup final against Italian side Benetton Treviso at the Stadio di Monigo next weekend, beating the Sharks 34-22 at Kings Park in Durban on Saturday night.

Benetton Treviso, who will be representing the northern hemisphere in the inaugural final, qualified after their last pool match against Welsh side Ospreys was cancelled due to Covid-19.

Sharks coach Sean Everitt started without several key players, including Ox Nche and Thomas du Toit, who were replaced by Khutha Mchunu at tighthead and Khwezi Mona at loosehead.

On the positive side, Everitt welcomed stars such as captain Lukhanyo Am, Springboks captain Siya Kolisi and Curwin Bosch back to the starting line-up after they were not available last weekend.

Ayanda Malinga, who has represented the Springbok Women and Imbokodo teams, scored three tries in the Blue Bulls’ dismantling of the Queens, with ...
Sport
11 months ago

For the Bulls, coach Jake While did not have too many disruptions as he picked the best possible squad with the exception of injured veteran No.8 Duane Vermeulen.

The Bulls took the lead through two early penalties by Steyn, who has been included in the Springbok squad for the Tests against Georgia and the British and Irish Lions.

The home side responded with the first try of the evening that was scored by JJ van der Mescht following great work by the Sharks forwards, and converted by Bosch.

The Bulls retook the lead when Hendricks showed the younger Bosch a clean pair of heels on his way to registering the first try for the Bulls, which was converted by Steyn.

The Sharks threatened in the closing stages of the first half but they could not find the second try and had to settle for a penalty that was kicked over by Bosch.

Ten minutes into the second half the Bulls pulled away with a try by Kriel but the home side reduced the deficit to five points with Kolisi’s try a few minutes later.

Springbok coach Jacques Nienaber has confirmed that there will be no replacement for injured Duane Vermeulen and that the team are expecting RG ...
Sport
11 months ago

The Bulls secured the match through late tries by Jacobs and Swanepoel, rendering the final try of the game by Sharks’ Anthony Volmink irrelevant as the tie was over as a contest.