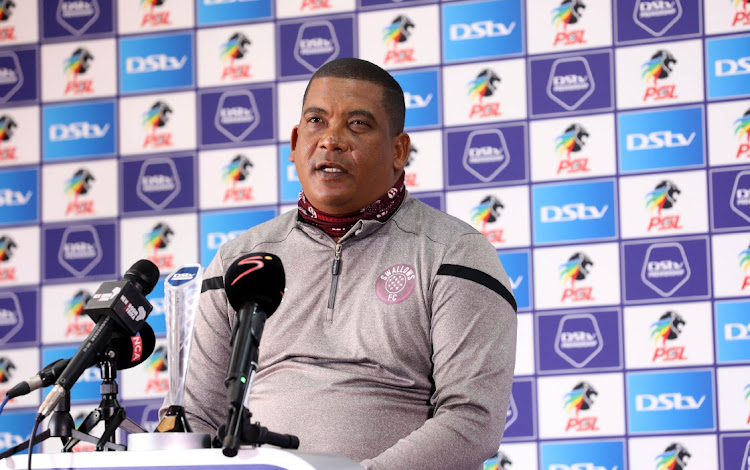 Swallows coach Brandon Truter seemed to suggest that the team’s management dropped the ball after he said he was unimpressed with the logistics and preparations for their trip to Cape Town.

Swallows played their third match in eight days in three different provinces as they held Cape Town City to a goalless draw in Athlone in the first leg semifinal of the MTN8 on Sunday.

They beat newcomers Royal AM in their opening DStv Premiership match on Sunday August 22 in Dobsonville, travelled to Durban where they held Benni McCarthy’s AmaZulu on Wednesday August 25 and trekked further up the coast for the MTN8 clash against City this past Sunday August 29.

“I am happy with the results but I am just not happy with the way we approached this game,” said Truter after Swallows failed to grab the advantage with an away goal ahead of the second leg on September 28 in Dobsonville.

“I think our recovery protocols, our off the field issues, our logistics need to be better managed because this is what we will get if we can take the methodologies seriously in football.

“The preparations for this game did not go as smoothly as I would have liked but then coming back from three games in the past week we managed still to open up good moments and I think towards the end of the game Keletso Makgalwa still had a chance to win it for us.”

Cape Town City and Swallows played to an exciting goalless draw in their first leg MTN8 semi-final in Athlone on Sunday but anyone who watched the ...
Sport
8 months ago

Playing three matches in a week early this season is always going to take a toll on players and it showed as the Swallows players legs were gone towards the end of the match.

“As much as our legs were gone and they were battering us we managed the situation and we came away with a scoreless draw, which is something to play for in Dobsonville [in the second leg].”

Swallows have 10 days to recuperate and sort out the “off the field issues” that Truter is not happy with before their next assignment at home against Soweto rivals Orlando Pirates on September 11.

Swallows have had a bright start to the new season with two wins and draws which including a 2-1 win over Pirates to advance to the MTN8 semifinals.

Striker Ruzaigh Gamildien was destabilised by the negotiations for a move to Kaizer Chiefs in the second half of last season and now that his mind is ...
Sport
9 months ago

“I welcome the international break at this moment, I welcome it honestly. The last problem area that we need to fix for us is we can’t create this amount of opportunities and not convert them.”

With no players in the Bafana Bafana squad that will play crucial back to back 2022 Fifa World Cup qualifiers against Zimbabwe and Ghana in the coming days, Truter will use this time to drill his players.

Hugo Broos, who named Ronwen Williams as the new Bafana captain and Percy Tau as his deputy on Monday will face the Warriors on Friday September 3 at the National Sports Stadium in Zimbabwe before hosting the Black Stars at FNB Stadium three days later.