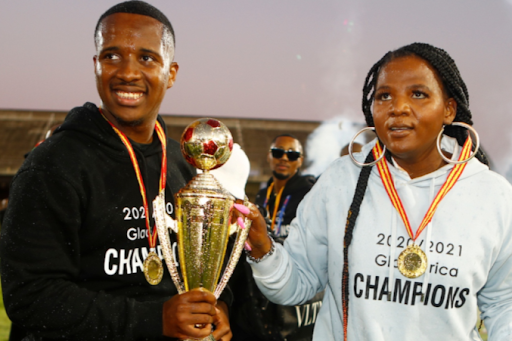 Andile Mpisane with Shauwn Mkhize of Royal AM FC during the GladAfrica Championship 2020/21 game between Royal AM and Cape Town All Stars at Chatsworth Stadium on May 23 2021
Image: Steve Haag/BackpagePix

Royal AM could be in hot water after it emerged on Monday that the increasingly controversial KwaZulu-Natal club could face sanction for distributing what appeared to be wads of cash to players on the pitch at the conclusion of their league match against Maritzburg United on Sunday afternoon.

Videos of Durban businesswoman and socialite Shauwn Mkhize and her son Andile Mpisane stunned the nation's soccer lovers after they handed out hard cash to the players at Royal following the 2-1 league win against United at Chatsworth stadium.

Some players looked uncomfortable as their unfazed employers continued to dole out piles of cash in full glare of television cameras.

It was a sight never seen in SA football and could attract further scrutiny from the SA Revenue Services (Sars).

The scenes sparked mixed reactions from fans and while many said the display was crass and a huge insult to South Africans who struggle to make ends meet every single day, others enjoyed the spectacle of it all.

Royal AM , Players given hard cash payment at the Stadium after win against Maritzburg United pic.twitter.com/IKZ3XlBVF9

"It goes to prosecutions. The match commissioner's report, incidents as well as all that happens at matches go to the prosecutions. Nande (Becker) would look at these and then decide [how to proceed further]," she said.

Becker confirmed the matter has been brought to his attention and he is investigating.

"I will only be able to make an assessment after I have looked at all the documentation," he said.

Sars spokesperson Siphithi Sibeko could not comment on the matter and said the Tax Administration Act prohibits officials from disclosing taxpayer information.

Royal only came into being after the purchase of the premiership status of Bloemfontein Celtic before the start of the season in August.

They have surpassed expectation as coach John Maduka's charges are third on the standings and have one of the most exciting players in the league, Victor Letsoalo, in their ranks. Letsoalo has managed to find the back of the net more frequently than more established players, putting the spotlight on the side.

But it is their ability to attract negativity and unnecessary attention for all the wrong reasons that has made them the talk of the town.

Handing out hard cash to players by Royal AM, thats disrespectful to the game of football and players. These are professional players not some stokvel!!!🤞🏿#DStvPrem #Sundowns pic.twitter.com/7jLRkmkjlj

After spending weeks in courts as they fought to be given a chance to play in the topflight, they have contrived to undo all that by pulling a myriad of stunts that have only served to embarrass the PSL.

They have seemed to thrive on controversy and fans have not forgotten that at the end of the lower tier season in May, they awarded themselves a trophy, medals and T-shirts emblazoned with the “2020/21 Champions” when the PSL had not done so.

They insisted they were the lower division champions and not rivals Sekhukhune United.

The matter remained in the courts for weeks and the KwaZulu-Natal side bought the franchise of Celtic, finally ascending to the topflight.