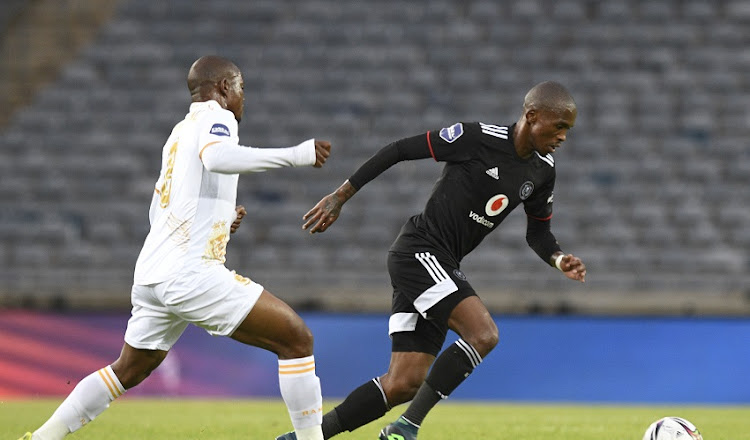 Orlando Pirates and Royal AM played out to a largely uninspiring 1-1 DStv Premiership encounter at Orlando Stadium on Thursday night.

As a result of this share of the spoils, fourth-placed Royal AM missed out on the opportunity to move to second spot on the standings behind Mamelodi Sundowns and they also missed out on what could have been their fifth win in six matches.

For the Buccaneers, they continued with their stuttering start to the season as they remain seventh on the log and still looking for their first league win in four matches, a run which includes one loss and three draws.

Royal AM will be looking to return to winning ways when they host SuperSport United at Chatsworth Stadium in Durban and Pirates will shift their attention to their next match, against Sekhukhune United, both on Tuesday.

The match got off to a good start with both teams creating goalmouth chances and referee Luxolo Badi issuing a yellow card for Royal AM defender Tshepo Rikhotso in the opening minute.

Pirates were awarded a free kick by Badi on the edge of the Royal AM penalty box after Rikhotso hacked down Linda Mntambo who was threatening to hurt the visitors in the early stages.

Mntambo, who was not badly injured, stood up to take the resultant free-kick himself but his effort went straight down the throat of well positioned Royal AM goalkeeper Patrick Nyame.

During the frightening opening minutes, unmarked Pirates striker Tshegofatsho Mabasa missed a sitter after he received a defence splitting pass from Fortune Makaringe who benefited from a misplaced pass by Nyame.

After a few attacks on their goalmouth, Royal AM launched a counter of their own and it resulted in Badi awarding the visitors a free kick on the edge of the box after desperate Pirates defender Olisa Ndah clumsily brought down Levy Mashiane.

Kamogelo Mashikinya stepped up to take the free-kick from an inviting position on the edge of the box but the Pirates wall did their job of protecting goalkeeper Siyabonga Mpontshane.

Cape Town City coach Eric Tinkler felt that on another night he would have been talking about all three points against Orlando Pirates, he said after ...
Sport
3 months ago

Royal AM opened the scoring after 32 minutes when Letsoalo stole the ball from experienced Pirates captain Happy Jele before supplying the pass to Mashiane who put it into the empty net.

Pirates equalised on the stroke of halftime when Mntambo’s speculative long range shot somehow found its way into the Royal AM net after he disposed of Samuel Mangayi on the left side of the field.

Early after restarting, Pirates lost Jele who was stretched off the field after a challenge by Letsoalo and he was replaced by Thulani Hlatshwayo in the heart of the defence.

Just after the hour mark, Mabasa’s clever and close range back heel was blocked by Nyame after Pirates put together a wonderful attacking move that included Bandile Shandu and Mntambo.

They kept on going at each in the in the closing stages of the first half but there were no more goals and they had to share the spoils.