Proteas coach Boucher takes swipe at journalists: 'There are a lot of media who don’t want me in this position'

SA won four of their five pool matches but were unsuccessful in the end as they finished third in a group of six teams, failing to reach the semifinals 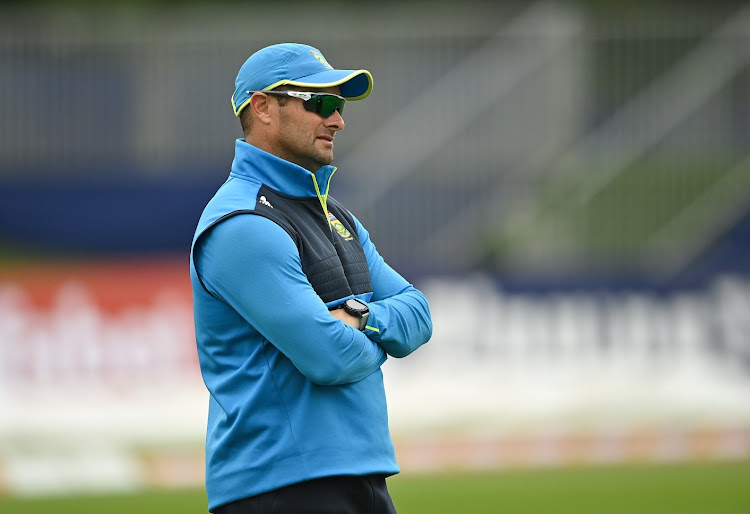 Head coach Mark Boucher says his only focus is to get the Proteas back to the top - where they belong.
Image: Seb Daly/Gallo Images

Proteas head coach Mark Boucher fired a broadside at the media on Tuesday, saying he knows “there are a lot of media who probably don’t want me in this position”.

The Proteas made a low-key return to SA without fanfare on Monday from their gallant but unsuccessful T20 World Cup campaign in the United Arab Emirates,  with Boucher and captain Temba Bavuma interacting with the media virtually only on Tuesday.

SA won four of their five pool matches but were unsuccessful in the end as they finished third in a group of six teams, failing to reach the semifinals because of an inferior run rate to England and Australia, the two teams who advanced from Group 1.

Boucher was asked how he had coped with the challenges that he and the team faced in the months and weeks leading up to the World Cup, including allegations of racism against him, and claims that the Proteas team environment was toxic among others.

“It is a tough question. Whatever I say people will try to write it in a different way I suppose,” said Boucher. “I would be lying to say it has not been tough. It was tough probably for myself as an individual and also on the team a well.

“We have had conversations and addressed the issues within the team and I would like to believe that I have their backing as well, after the sort of honest chats that we had.

Proteas coach Mark Boucher has admitted he is struggling to come to terms with the team's failure to qualify for the semi-finals of the ICC T20 World ...
Sport
3 weeks ago

“With regards to going forward, I know that there are a lot of media who probably don’t want me in this position. But my agenda has always been to try to get the best out this group of players and get SA cricket to where I believe we should be —  at the top again.

“Until anything else happens I will continue to try to do that to the best of my ability.

“My focus is on the players and it will continue to be for as long as I am in this position.”

The Proteas lost against the old enemy Australia in their opening match before bouncing back with four successive wins, including tight victories over West Indies, Sri Lanka, Bangladesh and pool winners England, and that defeat proved to be the difference as it sunk them, with Australia finishing with a better net run rate than the Proteas.

“Obviously the low was not getting further in the competition which would have been nice for the guys,” Boucher reflecting on their performances during the World Cup campaign.

“The highs are just the way the guys are around each other, there is a lot of good team spirit that they have put together and  I think that comes through in  the way we play in pressurised situations.”

In the end, net run rate proved to be the undoing of the Proteas as they exited yet another major tournament and this time despite their 10 runs ...
Sport
3 weeks ago

The other contributing factor to their inferior net run rate was that Australia bowled out the pool’s whipping boys, Bangladesh, for 73 and chased it down in 6.2 overs while the Proteas used all of 13.3 overs to hunt down 85 against the same team.

Boucher said the conversation during the innings break, after bowling Bangladesh out for 84, was to try to win as quickly as possible.

“First of all you have to try to win the game, that is your first goal, and then set yourself up to get the runs within as little time as possible. Unfortunately, it did not happen.

“We lost a wicket I think in the first over and we ended up losing three wickets in the power play, so we were not really in a position to bash the runs in six or seven overs. I think the wicket played a part in there as well.

“We still won the game with 12 or 13 overs but in hindsight we can have a look at all the different things, and say maybe we should have bashed it in seven or eight overs, which was the idea, but were we in a position to do that? No.

“We did not know what the outcomes of the other games would be, we were focused on winning games of cricket, we won them well, but unfortunately it was not good enough,” Boucher said.

The former wicketkeeper-batter said the experience in the United Arab Emirates will put the Proteas in a good stead, especially with the next T20 World Cup in Australia in October and November less than a year away.