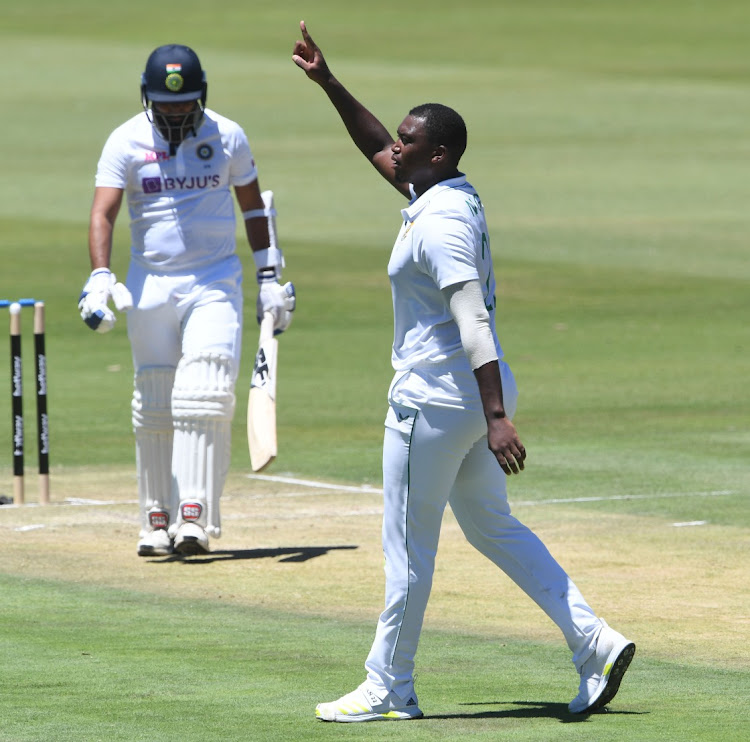 Proteas fast bowler Lungi Ngidi celebrates one of his wickets on day three of the Boxing Day Test at SuperSport Park on Tuesday.
Image: Lee Warren

Lungi Ngidi and Kagiso Rabada bowled exceptionally upfront as SA claimed seven Indian wickets with 55 balls and in just over an hour on Tuesday morning.

India started day three of this Boxing Day Test at SuperSport Park on 272/3 but Ngidi, Rabada and debutant Marco Jansen ripped through their middle and lower order to bowl the visitors out for 327.

Ngidi was the pick of the Proteas bowlers with 6/71. He was followed by Rabada on 3/72 while there was a significant milestone for Jansen who claimed his maiden Test scalp with the wicket of Jasprit Bumrah.

SA were on 21/1 when lunch arrived, with Keegan Petersen on 11 and Aiden Markram on 9 after the early dismissal on 1 run of captain Dean Elgar, who was caught by Rishbh Pant from the bowling of Jasprit Bumrah in the first over.

Earlier, SA got the breakthrough after four overs when KL Rahul (123), who added only one run to his overnight score, was caught behind by Quinton de Kock from the bowling of Rabada.

Olivier was widely tipped to replace injured Anrich Nortjé and make a return to Test cricket against India having last played for SA against Sri ...
Sport
1 month ago

Ngidi joined the party with his fourth wicket of the match when Anjikya Rahane nicked the ball to De Kock as the Proteas began to make inroads into the Indian middle order.

Ravichandran Ashwin did not last long as he was caught by Keshav Maharaj at short cover trying to play the ball through midwicket from the bowling of Rabada.

Ngidi registered his fifer when Pant was caught by Rassie van der Dussen at short leg and he was soon followed by Shardul Thakur, who was caught by De Kock from Rabada.

Ngidi continued with his rich vein of form when he removed Mohammed Shami for his six-wicket haul and Jansen was finally rewarded for his persistence when he got the last wicket of Bumrah.

It was also a good morning for De Kock who claimed four catches behind the stumps.