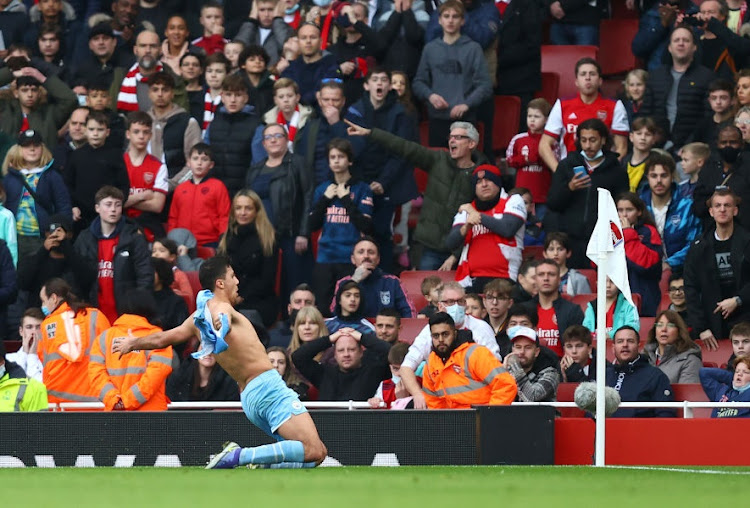 Rodri of Manchester City celebrates after scoring his side's second goal in the Premier League match against Arsenal at Emirates Stadium in London on January 1 2022.
Image: Julian Finney/Getty Images

A stoppage-time goal from midfielder Rodri gave Premier League leaders Manchester City a 2-1 win at Arsenal on New Year's Day as the home side finished the game with 10 men after the sending-off of defender Gabriel.

Casting aside any lingering memories of their 5-0 thrashing at the hands of City in August, the Gunners pressed high up the pitch and took the lead in the 31st minute when Bukayo Saka finished a sweeping move by rifling home Kieran Tierney's pass.

City levelled from the spot through Mahrez early in the second half when Granit Xhaka was adjudged to have fouled Bernardo Silva in the box before Arsenal had Gabriel sent off for his second yellow card two minutes later.

Rodri then struck from close range in second-half stoppage time to give City a win that extends their lead over Chelsea, who take on third-placed Liverpool on Sunday, to 11 points, while Arsenal are fourth on 35 points.

Klopp's side slipped to just their second league loss of the season at the King Power Stadium to leave them trailing City, who beat Leicester 6-3 on ...
News
2 weeks ago