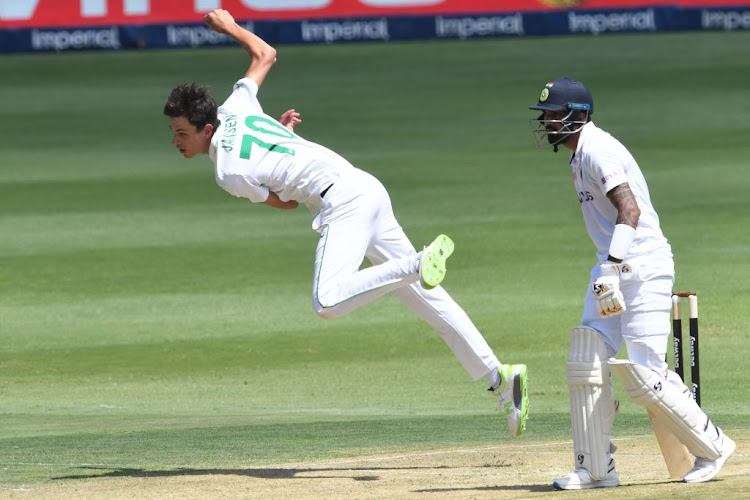 Marco Jansen of the Proteas during day 1 of the 2nd Test match against India at The Wanderers on January 3 2022 in Johannesburg.
Image: Lee Warren/Gallo Images

India just about mirrored their exploits of the morning in the middle session on the first day of the second Test at the Wanderers on Monday.

The tourists were 146/5 at tea as they continued to struggle to come to terms with the, at times, exaggerated bounce the SA attack was able to extract from the Wanderers pitch.

For their part the hosts got a handle on what is required after an unproductive opening hour at the start of play and again after the lunch break.

In the early afternoon session KL Rahul and Hanuma Vihari attempted to steady the ship that was broadsided just before lunch.

Rahul, man of the match in the first Test, batted with considerably more restraint, having the added burden of stepping into the breach for injured captain Virat Kohli.

Duanne Olivier sped to 50 Test wickets as SA had India firmly on the back foot at lunch on the first day of the second Test at the Wanderers on ...
Sport
7 months ago

Kagiso Rabada eventually made the breakthrough when Vihari failed to ride a bouncer and was brilliantly caught by Rassie van der Dussen leaping high to his left at short leg.

Vihari, who is in the team for Kohli, must have felt gutted getting out just when it looked like he had weathered the storm.

The same applied to Rahul who dug in even deeper, only to get out tamely. Having reached his 50 off 128 deliveries he took on a Marco Jansen bouncer and was fabulously caught by Rabada at fine leg.

Earlier SA tightened up their act considerably in the field. They were helped by lanky left armer Jansen making the initial breakthrough with the first ball after the morning drinks break.

Tall left-arm seamer Marco Jansen has received his first call-up to the SA One-Day International squad for their three-match home series against ...
Sport
7 months ago

Duanne Olivier, from the other end, took a more direct approach. When he wasn't taking aim at the stumps his variation in length had the batsmen on their toes. Cheteshwar Pujara had trouble fending off the short balls and survival mode kicked in.

Pujara, whose scoring is predominantly built around wearing bowlers down, reverted to his default setting, while the obdurate Rahul operated on the same wavelength.

Another short one from Olivier had Pujara caught at backward point by Temba Bavuma before another stalwart short of runs, Ajinkya Rahane, was out next ball.

He played an uncharacteristically loose shot to be caught in the slips cordon that further served to temper India's scoring.

It wasn't just Olivier who applied the squeeze. Lungi Ngidi toiled hard from the Corlett Drive End, though not with the same reward.

Slanting the ball back at the right handers he often induced a false stroke by finding the inside edge, only for the ball to tantalisingly evade short leg.

He could have had Vihari caught at backward point but the normally reliable Bavuma, who got both hands to the ball, could not grasp the opportunity.