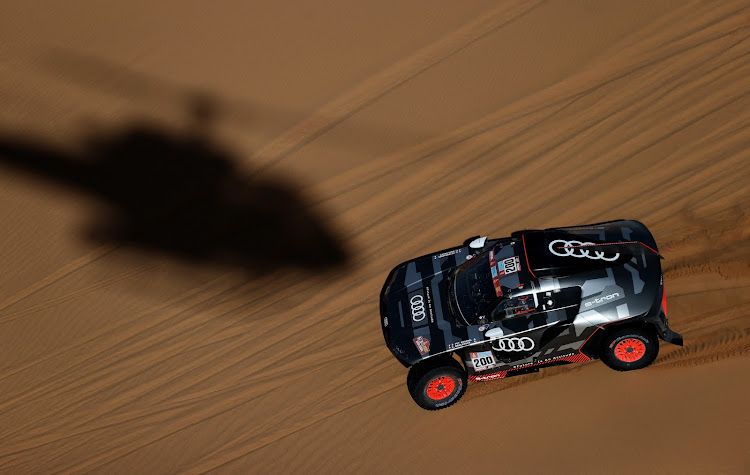 The stage victory was a first on this year's event for 'Mr Dakar' Peterhansel, a 14-times winner on two wheels and four and now driving an electric hybrid Audi, who dropped out of contention for the title in Saudi Arabia last week.

Qatar's Nasser Al Attiyah retained a comfortable lead with two stages remaining before the finish in Jeddah on Friday, although closest rival Sebastien Loeb cut the gap to 32 minutes and 40 seconds.

Loeb, a nine-times world rally champion and driving for the Bahrain Raid Xtreme team, was fifth on the 375km stage from Wadi Ad Dawasir to Bisha with Peterhansel leading Audi teammate Carlos Sainz.

Argentinian rider Kevin Benavides ended the defence of his Dakar Rally title on Wednesday when his KTM motorcycle broke down on the 10th stage in ...
Sport
6 months ago

Three-times Dakar winner Al Attiyah was seventh, five minutes and 50 seconds off the pace, and also collected a five-minute penalty for a breach of the seat belt regulations.

"We are happy to finish and without losing a lot of time ... Tomorrow it's a good road position for us," said the Toyota factory driver, last year's runner-up who has led since day one.

"We had no punctures today, no issues with the car, navigation was good with (co-driver) Mathieu (Baumel). Step by step, we will get there."

Benavides ended the defence of his title when his KTM motorcycle broke down 133km into the stage and he was unable to fix it.

He won last year on a Honda to become the first South American to win the event -- now in it's 44th edition -- on a motorcycle.

The 33-year-old had been fifth overall, some 10 minutes behind his Austrian teammate and overnight leader Matthias Walkner, who ended the day fourth with France's Adrien van Beveren taking over at the top.

"I made an error at the entrance to a canyon, I went the wrong way, but I realised my mistake and retraced my steps," he said. "I'm a bit frustrated, but I'll be starting in a decent position tomorrow, which is comforting."