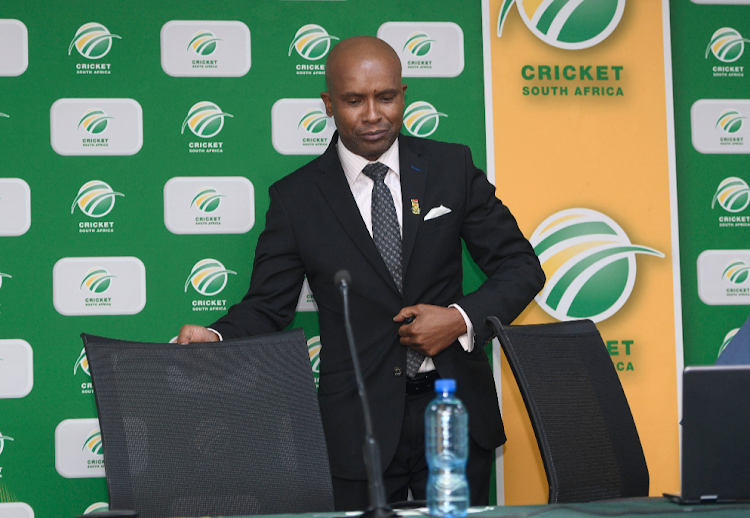 Pholetsi Moseki was named as the new CEO of Cricket SA after acting in the role since December 2020 at the organisation's headquarters in Johannesburg on March 16 2022.
Image: Sydney Mahlangu/BackpagePix

SA are set to take to the field in the two-match Test series against Bangladesh without Kagiso Rabada, Lungi Ngidi and Marco Jansen, Rassie van der Dussen and Aiden Markram after the Proteas players chose riches of the IPL over national team duty.

The Test series forms part of the World Test Championship (WTC) and will be played in Durban and Gqeberha between March 31 and April 12.

Another front-line bowler, Anrich Nortjé, who will miss the Bangladesh Tests due to injury, would have probably chosen IPL dollars over the two matches against Bangladesh.

Cricket SA (CSA) has not objected.

Moseki, on Wednesday confirmed as CSA's permanent CEO after acting in the role since December 2020, said the organisation took into consideration the money the players would earn at the IPL, which will help them to be on a good financial footing post their playing days.

Cricket SA (CSA) ended its long search for a new CEO, announcing Pholetsi Moseki, who had been acting in the position, as the organisation’s new boss ...
Sport
5 months ago

The Indian board is by far the wealthiest organisation in world cricket and wield huge influence. Coffers of a host cricket organisation bulge significantly when the Indian team tours anywhere in the world and everyone jostles to have the Indians on their shores.

Hardly any cricket board can stand up to the Indians and object to their players going to the IPL, even if they have the powers to do so.

“The many T20 leagues around the world have obviously complicated things but as things stand we basically can’t block players going to the IPL,” Moseki said.

“The IPL is the only league globally that you can’t refuse for players to go to.”

Moseki said CSA supports the players’ choice and has no doubt of their commitment to playing for the Proteas.

The new boss said the players are as disappointed as some members of the public are at having to abandon national duty for the IPL.

“As CSA in a way we do support them because remember the money they make in the IPL is quite good for their post-cricket playing career or livelihoods. So it is quite a delicate balance to strike.

Cricket SA has announced a strong, unchanged 16-man squad for the ODI series against Bangladesh starting next week Friday at SuperSport Park in ...
Sport
5 months ago

“What I do know for a fact with all those players is that they take playing for their country very seriously.

“It doesn’t mean that they think less of the national team duty or they are less patriotic.”

Teenager Dewald Brevis will debut for the Mumbai Indians while Jansen, Van der Dussen and Dwaine Pretorius will look for performances that will keep them in the money-spinning T20 league.

The majority of them are used to the millions paid by IPL franchises each year while the likes of Brevis would be turned into millionaires almost overnight.

SA’s inbound tour of Bangladesh starts with the first of three ODI matches in Centurion on Friday where all their IPL stars should be available.

The second match is the Pink Day ODI at the Wanderers on Sunday before action returns to Centurion for their final clash on Wednesday March 23.

It will be touch and go on whether the team fields full strength teams in the second and third ODI against Bangladesh as the IPL start in Mumbai on March 26 and ends on May 29.