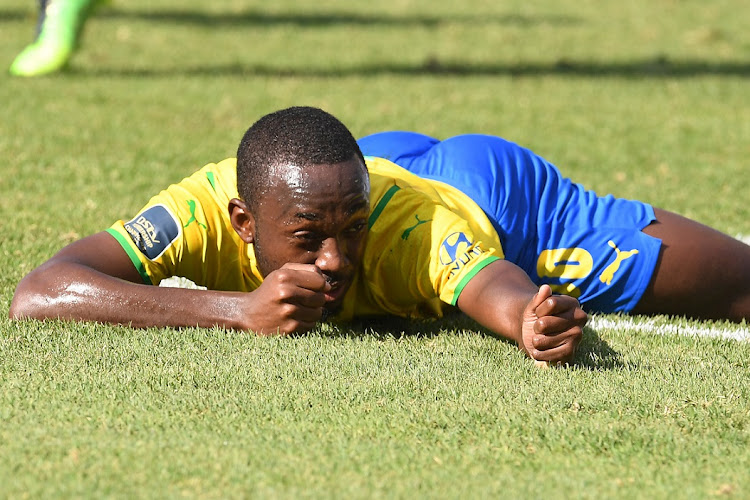 Mamelodi Sundowns’ red-hot striker Peter Shalulile edged closer to Collins Mbesuma’s 16-year-old record for the most goals in a DStv Premiership season with a second hat-trick in successive league games against Golden Arrows on Wednesday.

Sundowns swept Arrows off the Loftus Versfeld pitch 6-0 as the runaway leaders marched closer to their fifth Premiership title in a row, and 12th overall.

He took his tally to 21 for the season and Downs have five games left to play.

Despite not playing a lot, Mamelodi Sundowns attacker Kermit Erasmus has pleaded with his teammates to remain as a unit and keep the brotherhood ...
Sport
2 months ago

The records continue to tumble for coaching trio Manqoba Mngqithi, Steve Komphela and Rulani Mokwena’s yellow machine, as the defeat was Arrows’ heaviest in the Premiership, previously having lost by a largest margin of four goals. Sundowns have scored 22 goals in their last five matches in all competitions.

Zambian striker Mbesuma scored 25 goals in the league for Kaizer Chiefs in the 2004-05 season and that record has stood since as players struggled to even break the 20-strike mark. Shalulile is now just four goals shy of Mbesuma’s record.

Since Mbesuma, now-retired Siyabonga Nomvethe is the only player who managed to pass 20 goals, for Moroka Swallows in 2011-12.

Shalulile has already beaten Nomvethe’s record and placed himself as the top contender for the PSL Footballer of the Season award.

Mamelodi Sundowns coach Manqoba Mngqithi says they will continue to rotate the squad to carefully manage players in their quest for an unprecedented ...
Sport
2 months ago

Sundowns didn’t just register their 17th league victory of the season but did so in style. Their intentions were clear as they led 3-0 within 30 minutes in Pretoria.

The home side dominated Arrows in all aspects from the start. The first goal was scored in the 19th minute by Sirino before the Shalulile show began, with the player scoring with his head, left foot and right foot.

Shalulile scored his first when he headed in a ball from Lyle Lakay amid some shambolic defending from Arrows.

The 28-year-old Namibian came back to complete his brace three minutes later and Arrows put the game beyond doubt with more than 60 minutes still to play.

Things were so bad for the Durban team that the players held their own meeting on the pitch at halftime before heading to the change rooms to be addressed by coach Lehlogonolo Seema. Seema’s team committed schoolboy errors in defence and did not trouble Sundowns’ goalkeeper Dennis Onyango.

WATCH | Themba Zwane has made his peace with Broos’ Bafana snub

Star Mamelodi Sundowns midfielder Themba Zwane has made peace with his continued omission to the Bafana Bafana squad.
Sport
3 months ago

Shalulile completed his hat-trick on 63 minutes before he was replaced by Erasmus after 78 minutes on the field.

Safranko scored the fifth goal of the match off the bench, coming in for Sirino, while Erasmus scored five minutes left before full time.

Sundowns are now on 57 points after 25 matches and need only six points to wrap up the league title.