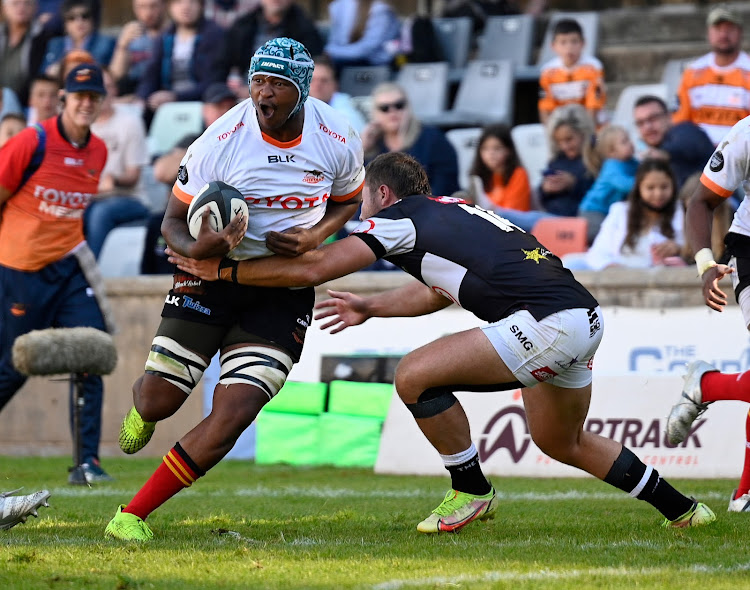 Mihlali Mosi of the Cheetahs during the Carling Currie Cup match against the Sharks at Toyota Stadium on May 14, 2022 in Bloemfontein, South Africa.
Image: Johan Pretorius/Gallo Images

The Cheetahs remain unbeaten after powering to their ninth Currie Cup win of the season with a 44-15 victory over the Sharks in Bloemfontein on Saturday.

They started the game in hot pursuit of the Bulls who had played one game more and got the job done against Etienne Fynn's Sharks team who had to operate under pressure for most of the match.

The Sharks who lost to the Pumas last weekend came into the clash having made eight changes and while they tried to play with enterprise, they did not see enough of the ball to make an impact.

Often, when they had possession, it was under duress inside their own territory.

With the hosts enjoying the lion's share of possession they could apply pressure and while the Sharks were game, their defence relented.

Cheetahs scrumhalf Ruan Pienaar mostly took smart decisions, while flyhalf Siya Masuku provided some impetus from first receiver. It helped set up a 24-10 lead for the Cheetahs at the break, and they could have been further ahead had the Sharks not at times stood their ground.

Springbok World Cup-winning winger S’busiso Nkosi is aiming for a fresh start with the Bulls.
Sport
1 week ago

The Cheetahs dotted down first thanks largely to a man who was surprisingly sprightly for someone who said his nuptials a week ago. But then you'd expect left-wing Rosko Specman to by default have a spring in his step.

His impact upon his return to the team was immediate. It was he who breached the Sharks defence and proved hard to put down in setting up the opening try for lock Victor Sekekete.

Hooker Marnus van der Merwe added the Cheetahs' second but the Sharks hit back through a converted Cameron Wright try after captain Jeremy Ward made gains near the touchline.

That was the only highlight for the visitors in a half spent mostly on the back foot.

It was the hosts however who made the most significant gains upfront. Flank Andisa Ntsila and the rest of the forwards' shoulder-to-the-wheel approach helped get the hosts across the advantage line but they also had the better of the primary phases.

The Cheetahs with Schalk Ferreira at the cutting edge put the squeeze on the Sharks' scrum.

Sharks confirm the return date for captain Lukhanyo Am

The Sharks are looking forward to welcoming back their captain Lukhanyo Am for their final push for a United Rugby Championship (URC) home ...
Sport
3 weeks ago

A brilliant team effort was rounded off by No8 Mihlali Mosi to stretch the Cheetahs' lead after the break but then they lost a man to the bin which gave the Sharks the licence to score a maul try.

Though the Cheetahs did not reach the same heights in the second half they were mostly untroubled.