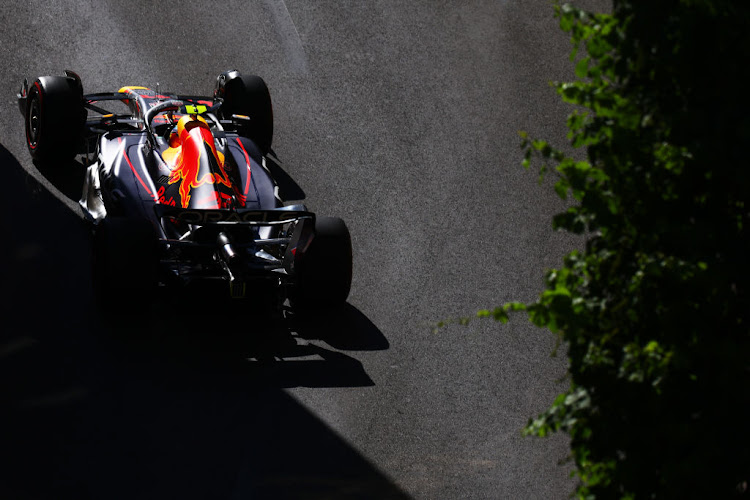 Sergio Perez on track during final practice ahead of the F1 Grand Prix of Azerbaijan at Baku City Circuit on June 11, 2022 in Baku, Azerbaijan.
Image: Mark Thompson/Getty Images

Red Bull's Sergio Perez edged out Ferrari's Charles Leclerc to put himself back on top in Saturday's final Formula One practice session for the Azerbaijan Grand Prix.

The Mexican, who headed into the weekend with his sights set on following up his Monaco victory by becoming the first repeat winner at the Baku city track, lapped the six-kilometre, barrier-lined layout in 1:43.170 seconds.

That was good enough to eclipse Leclerc, who is looking to bounce back from the double disappointment of losing out on victory in Spain and Monaco, by 0.070 seconds.

The pair have traded places at the top of the practice time sheets all weekend, with Perez fastest in Friday's opening session and Leclerc taking over in practice two.

World championship leader Max Verstappen, who is nine points ahead of Leclerc and 15 ahead of Perez in the overall standings, had to abort his final flying lap and settle for third nearly 0.3 seconds off the pace.

Pierre Gasly was seventh for AlphaTauri ahead of Mercedes driver George Russell and Esteban Ocon's Alpine.

Lewis Hamilton, who changed the set-up on his Mercedes during the session, was only 12th. The Briton was informed by his race engineer that his engine had been turned down.

The final practice session got under way 15 minutes late after a crash in the preceding Formula Two race damaged some barriers.

Qualifying will therefore also start with a 15-minute delay later on Saturday.