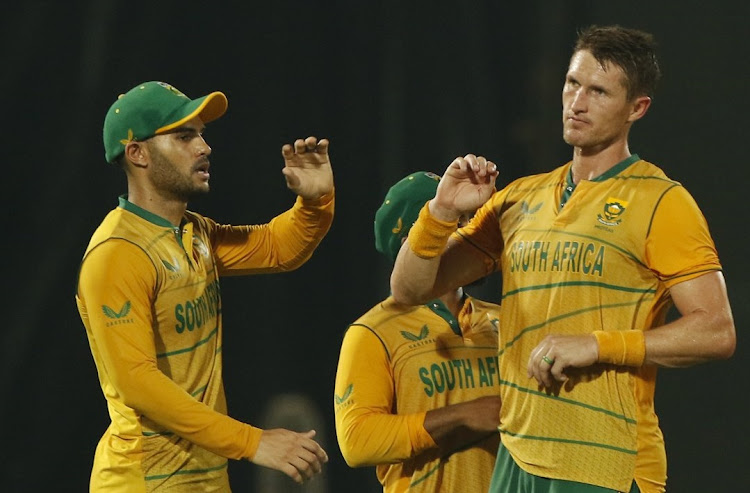 The Proteas bowlers fought their way back into the innings after a fast start by the Indian openers with Dwaine Pretorius (right) snagging 2-29 as the hosts posted 179-5.
Image: Cricket SA/Twitter

India clawed their way back into the T20 series with a 48-run thrashing of SA in the third of five matches at Dr YS Rajasekhara Reddy Stadium in Visakhapatnam on Tuesday night.

India went 2-0 down with successive defats in Delhi and Cuttack, but responded emphatically to beat the woeful Proteas and keep the series alive at 2-1.

So poor were SA with the bat that six batters failed to score past the 10-run mark and the highest scorers were Heinrich Klaasen (29), Reeza Hendricks (23), Wayne Parnell (22) and Dwaine Pretorius (20).

SA approach the last two matches in Rajkot and Bengaluru on Friday and Sunday with everything to play for, but most importantly facing India with their tails up after a victory where they impressed in all departments.

Heinrich Klaasen capitalised on his chance selection to smash 81 off 46 balls as SA beat India by four wickets in the second T20 International in ...
Sport
1 week ago

Temba Bavuma won the toss and elected to field. India’s opening batters Ruturaj Gaikwad (57) and Ishan Kishan (54) put the home side on the path to victory with an innings-setting partnership of 97 off 60 balls.

The other notable contributor to the scoreboard was Hardik Pandya with an unbeaten 31 while Shreyas Iyer, Dinesh Karthik, Rishabh Pant and Axar Patel failed to cover themselves in glory with a combined 31 runs.

For the Proteas, Dwaine Pretorius was the pick of the bowlers with the scalps of Kishan and Pant while Kagiso Rabada, Tabraiz Shamsi and Keshav Maharaj helped restrict India to 179.

The target proved too much for SA who were bowled out for 131 with Harshal Patel claiming four wickets, followed by Yuzvendra Chahal with three.

The other destroyers with ball in hand for India were Axar Patel and Bhuvneshwar Kumar who ended their shifts with one scalp apiece as the Proteas were brought down to earth.