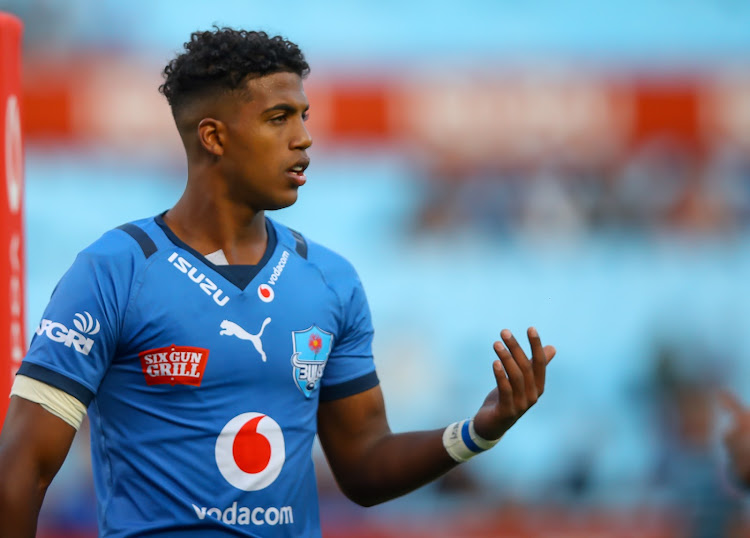 Exciting Bulls utility back Canan Moodie has been forced to withdraw from the Junior Springboks squad for the Summer Series in Italy.
Image: Gordon Arons/Gallo Images

The Junior Springboks have suffered a massive blow ahead of the U20 Six Nations Summer Series in Italy with Bulls utility back Canan Moodie ruled out of the tournament due to injury.

Though they will be without Moodie, there is encouraging news that Stormers flyhalf Sacha Mngomezulu and Bulls lock Reinhardt Ludwig have reported for camp after playing for the teams in the United Rugby Championship (URC).

Mngomezulu will captain the team in Italy with Ludwig and Western Province centre Ethan James named as his vice-captains.

Moodie injured his jaw in Saturday’s URC Grand Final loss to the Stormers, and this forced coach Bafana Nhleko to make one change to the 30-man squad with Latica Nela coming in as replacement.

The exciting Bulls player, who was a member of last year’s successful Junior Bok team which won the International U20 series in SA, has shown his versatility by playing at fullback and on the wing for the Bulls in the URC.

Nela, who has been part of this year’s academy programme which featured an enlarged U20 training group before it was trimmed down to the official 30-man squad, has also played for the SA Rugby Sevens Academy side.

“Canan is an exciting rugby talent and, having had the privilege of working with him last year, I am not surprised by the strides he has made this season with the Vodacom Bulls,” said Nhleko.

“Unfortunately, injuries are part of the game and his withdrawal gives Latica an opportunity to be part of the tour. He has been part of our SA Rugby Academy programme for the past three months in Stellenbosch and is very familiar with our environment and our plans, so he should slot in very comfortably.”

Nhleko was pleased to announce his leadership group for the trip, with both Mngomezulu and Ludwig back for second stints with the SA U20 team.

“We purposefully kept the announcement of our team leaders until after the URC Final so these young men could prepare as best as they could with their teams and without any added distractions for what was a truly a special occasion for SA rugby,” explained Nhleko.

“The squad worked hard and prepared well during our academy camp in Stellenbosch, and we are all looking forward to test ourselves against some very good quality opposition in Italy.”

Johan Goosen's international career that stalled in 2016 could be revived on the Springboks' end-of-year tour.
Sport
2 weeks ago

The Junior Boks will open their Summer Series commitments against England on June 24, followed by their second match on June 29 against Ireland.

SA will complete their pool fixtures on July 5 against France before playing a final cross-pool fixture on July 12, with their opponent to be determined according to the final standings.