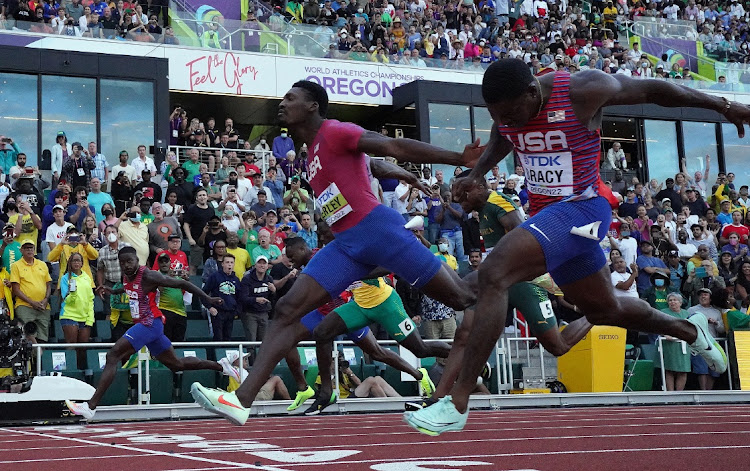 Fred Kerley of the US crosses the line to win the men's 100 metres final ahead of Marvin Bracy and Trayvon Bromell. Akani Simbine can be seen between Kerley and Bracy.
Image: REUTERS/ LUCY NICHOLSON

Akani Simbine kept his title of world sprinting’s Mr Consistency as he ended fifth in a 100m dominated by the American home boys at the world championships in Eugene, Oregon, on Sunday morning (SA time).

Fred Kerley won in 9.86sec, ahead of compatriots Marvin Bracy and Trayvon Bromell, separated by two-thousandths of a second at 9.88. Jamaica’s Oblique Seville was fourth in 9.97 followed by Simbine in 10.01.

For Simbine, this is his seventh straight year in the world’s top five. Topped by fourth places at the Tokyo Olympics last year and the 2019 world championships, the 28-year-old has not been able to break his way onto the podium at a major meet. He was fifth at the 2016 Rio Olympics, 2017 world championships and the 2018 Diamond League final.

Akani Simbine’s incredible six-year run inside the top five of the world could come to a crashing end at the world championships in Eugene, Oregon, ...
Sport
1 month ago

At least Simbine had the satisfaction of edging defending champion Christian Coleman, the fourth American in the field, by two-thousandths of a second and delivering his season’s best in the semifinals to secure a spot in the final.

The South African had looked unimpressive in Friday’s heats, advancing to the semifinals as a fastest loser after finishing fourth in his race in 10.07sec, which placed him 14th overall.

With a best time of 10.02 this season coming into the championships he didn’t seem to have much in the tank. But Simbine possessed qualities that many of his rivals seemed to lack — BMT and experience.

Simbine stormed through to win the first semifinal in 9.97, edging Bromell, the bronze medallist in 2015 who had blitzed the heats in 9.89. Simbine was the only one in that semifinal to improve on his heat time, and most of his rivals in the other two races also went backwards.

By the end of the semifinals there had been some big casualties. Olympic champion Lamont Marcell Jacobs of Italy failed to start and the bronze medallist,  Canada’s Andre De Grasse, joined him on the sidelines. Jamaica’s veteran Yohan Blake was also a goner.

Letsile Tebogo of Botswana, after clocking a 9.94 world junior record in the heats, faded into distant oblivion, while African champion Ferdinand Omanyala of Kenya, who arrived in Eugene three hours before his heat after enduring visa problems, also dropped out.

The Commonwealth Games in Birmingham from July 28 to August 8 looks set to produce an exciting 100m with Simbine, the defending champion, going up against Omanyala, Seville and Blake. Tebogo is likely to defend his world under-20 crown in Cali, Colombia.

Soks Zazini, one of SA’s late arrivals into Eugene, only just managed to squeeze into the 400m hurdles semifinals as the fourth of four fastest losers in 50.09. He finished fifth in his heat that also had the slowest winning time of the five races, 49.41 by Brazil’s Alison Dos Santos.

The other two late arrivals in action on the day, Carina Horn in the women’s 100m and Ryan Mphahlele in the men’s 1,500m, both failed to progress beyond their heats.

Mphahlele attacked from the start, moving to the front of the race, but he was overpowered by his rivals and he finished last in 3min 39.17sec.

Dominque Scott, who lives in the US, was 17th in the women’s 10,000m, won by Ethiopian Letesenbet Gidey of Ethiopia in a 30min 09.94sec world lead to hold off the the Kenyan duo of Helen Obiri and Margaret Chelimo Kipkemboi. Both clocked personal bests as they finished second and third in 30:10.02 and 30:10:07.

Antonio Alkana failed to advance out of the men’s 110m heats after finishing fifth in his heat in 10.64, six-hundredths of a second off the slowest qualifier.