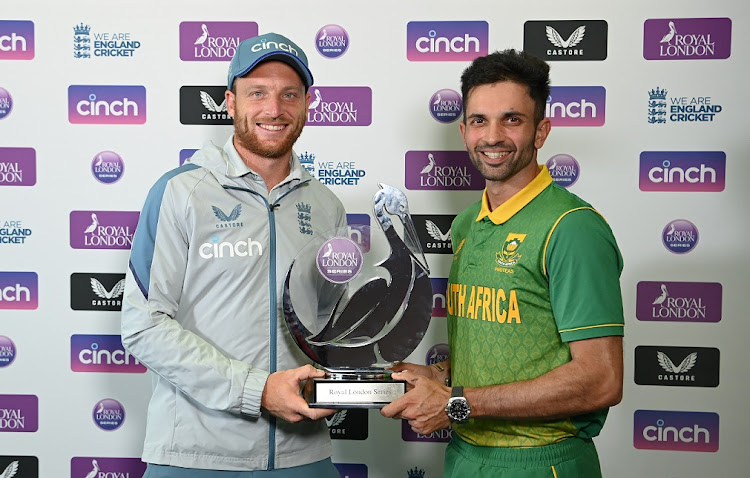 Captains Jos Buttler of England and Keshav Maharaj of SA with the trophy after the series finished all square at 1-1 after the abandoned third ODI at Headingley in Leeds on July 24 2022.
Image: Stu Forster/Getty Images

England’s decisive one-day international against SA at Headingley on Sunday was abandoned because of rain, with Proteas opener Quinton de Kock agonisingly short of a century.

No result means the three-match series was tied at 1-1 after SA won the first ODI by 62 runs with England rebounding to win the second by 118 runs.

The Proteas won the toss on Sunday and elected to bat with De Kock 69 not out before the first break for rain. When the teams returned for another seven overs, he moved onto 92 not out before rain fell again, leading to a decision to abandon the contest.

SA were 159-2 from 27.4 overs. The two countries now meet in three Twenty20 internationals, starting in Bristol on Wednesday.

Proteas wicketkeeper/batter Heinrich Klaasen does not believe the fact that SA have not won an ODI series in England in 24 years will weigh heavily ...
Sport
2 weeks ago