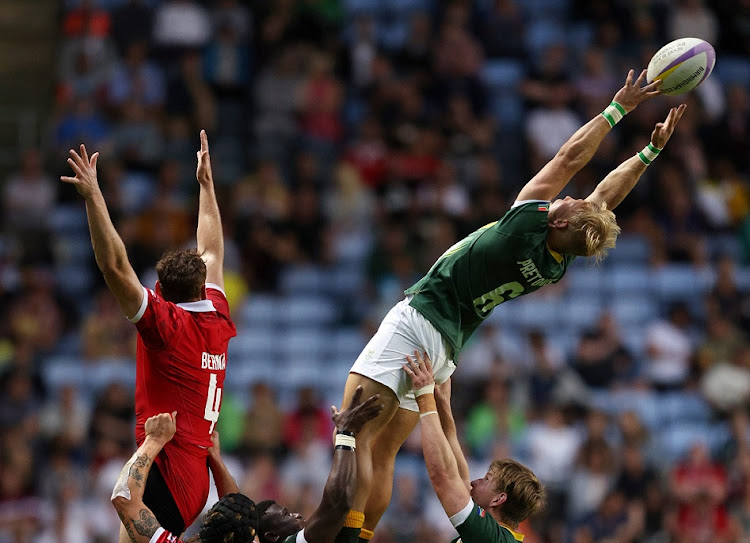 JC Pretorius of Team SA catches the ball from a lineout in the men's Rugby Sevens quarterfinal against Canada at the Birmingham 2022 Commonwealth Games at Coventry Stadium on July 30 2022.
Image: Photo by Richard Heathcote/2022 Getty Images

The Springbok Sevens were in firm control of their Commonwealth Games quarterfinal on Saturday evening as they beat Canada 33-0 to advance into the top four, where they will meet Australia.

They will be without Siviwe Soyizwapi though, as the SA captain’s tournament was cut short after he was injured against Scotland earlier on Saturday — a match the Blitzboks won 34-0.

The Springbok Women’s Sevens will face Sri Lanka at 7pm on Sunday evening in the seventh-place playoff.

Blitzboks through to the Commonwealth quarterfinals

The Springbok Sevens team have qualified for the Commonwealth Games quarterfinals after they beat Tonga (36-5) and Malaysia (46-0) in their two Pool ...
Sport
1 week ago

Zain Davids, who took over the men’s captaincy in the quarterfinal from Soyizwapi, said: “We will always be happy with a victory, especially as we stuck to our processes, defended well and we also did our basics well. So I think we can be happy.

“Losing ‘Shakes’ is not great — he is a proper leader who leads from the front and never gives up, the players really look up to him and we realise we have big shoes to fill, but we will try to do that for Siviwe.”

🤩 Happiness for the Blitzboks at the @birminghamcg22 as they go into the semi-finals with a clinical victory over Canada - day two wrap here: https://t.co/TEI3nkfS4P#BestofUs @TeamSA2024 pic.twitter.com/kaFSJttSyo

On their semifinal opponent, Australia — who beat Samoa by 7-0 in their quarterfinal — Davids said they will approach it as any other game: “It doesn’t matter who we play, for us it’s ‘game five on day three’ and our focus will be on sticking to our processes and getting our basics right.”

Against Canada on Saturday evening, three first-half tries — by Ronald Brown, Christie Grobbelaar and Angelo Davids — set up a 21-0 lead at the break, with Angelo Davids's intercept try from 80m out — while Brown was in the sin bin for a high tackle — summing up the SA team’s dominance.

Blitzboks bounce back from Toulouse disappointment, into London quarters

The Springbok Sevens team bounced back from their disappointment in Toulouse last weekend by winning all three their pool games at the HSBC London ...
Sport
2 months ago

The Canadians tried hard, but defensive pressure from SA saw them make a number of unforced errors, which the Blitzboks pounced on with gratitude.

Brown got his second try not long after returning to the field shortly after the break, scoring from a Canadian mistake to stretch the lead to 26-0.

Mfundo Ndhlovu, who was declared fit after taking a heavy knock on the first day, also got his name on the score sheet with just over a minute left in the game.

The first semifinal in the men’s competition kicks off at 1.42pm, with defending champions New Zealand taking on Fiji.