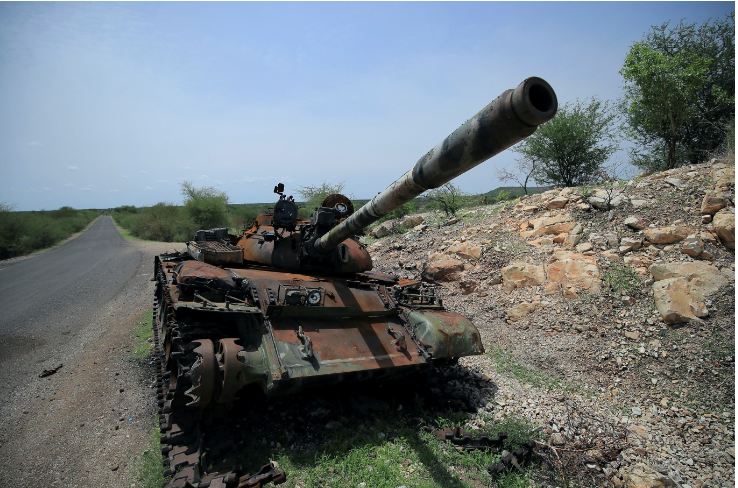 Ethiopian troops withdrew from most of Tigray in late June when the TPLF retook Mekelle.
Image: REUTERS/ STRINGER/ FILE

Thousands of Ethiopian army recruits paraded in Addis Ababa on Tuesday to bid farewell before leaving for training, potential future participants in a bloody eight-month-old conflict in the north that continues to spread and intensify.

Young women and men wearing plastic sandals and baseball caps with slogans such as "Ethiopia is calling" danced in central Meskel Square at a ceremony attended by defence minister Kenea Yadeta and the capital's deputy mayor, Adanech Abiebe.

The mayor’s office said 3,000 young people would join the ranks of Ethiopia's National Defence Force (ENDF). Some recruits spoke of pride in describing their motives. Others mentioned economic need.

My father was a member of ENDF and retired 10 years ago. I am here to continue his legacy

Teku Shega said his father used to fight in the federal army, and he wants to pursue that heritage.

“My father was a member of ENDF and retired 10 years ago. I am here to continue his legacy,” the 25-year-old construction worker from the Amhara region said.

For Girma Takele, the army is a chance to escape unemployment.

“I am joining the National Army because I have been jobless for three years ... now at least I will have a job,” said the 18-year-old, originally from Oromiya.

The conflict between the central government and the Tigray People’s Liberation Front (TPLF), the party that controls the Tigray region, is spreading to other parts of northern Ethiopia, and youth from other parts of the country are joining federal forces in the fight.

Fighting first broke out in Tigray in November when the government accused the TPLF of attacking military bases across the region - an accusation the group denied.

Forces in Ethiopia's northern Tigray region have released around 1,000 government soldiers captured during recent fighting, the head of its ruling ...
Africa
1 year ago

The government declared victory three weeks later when it took the regional capital Mekelle, but the TPLF kept fighting and has since taken back most of Tigray.

Ethiopian troops withdrew from most of Tigray in late June when the TPLF retook Mekelle. The central government declared a unilateral ceasefire on what it said were humanitarian grounds.

Last week, Tigrayan forces pushed into Afar, the region to the east of Tigray, where they said they planned to target Amhara troops fighting alongside the federal military.

Ethiopia will show a sceptical world that it can successfully hold a peaceful election next week, Prime Minister Abiy Ahmed told a crowd of tens of ...
Africa
1 year ago

Afar is home to the main highway and railway linking landlocked Ethiopia's capital Addis Ababa with the sea port of Djibouti.

Thousands of people have died in the fighting, around 2 million have been displaced and more than 5 million rely on emergency food aid.