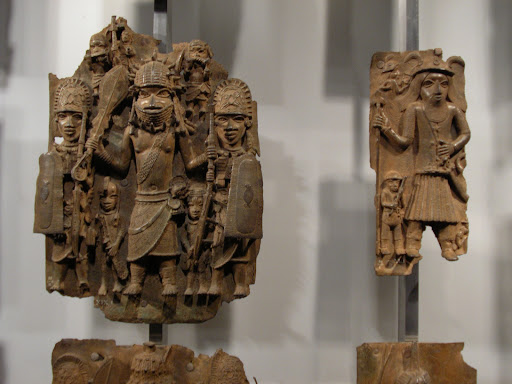 The British Museum has accepted a bronze plaque made by an artist from Benin City in Nigeria, who said he felt this was a possible first step towards the museum's return of the priceless Benin Bronzes that were looted by British troops in 1897.

The museum told him however an exchange of new for looted artworks was impossible, he added.

Osarobo Zeickner-Okoro had offered his creation to encourage the museum to give back the sculptures but also to demand acknowledgment of Benin City's modern-day culture.

Ten more students who were kidnapped by gunmen from a school in Nigeria two months ago have been released after ransom was paid, the school ...
Africa
9 months ago

After meeting with two curators from the museum's Africa department, he told Reuters on Thursday he was delighted they had accepted his gift even though they rejected the idea of an exchange.

“It's disappointing but this is the first step,” he said.

Created from brass and bronze in the once mighty Kingdom of Benin from at least the 16th century onwards, the Benin Bronzes are among Africa's most culturally significant artefacts. European museums that house them have faced years of criticism because of their status as loot and symbols of colonial greed.

A founding member of Ahiamwen, a new guild of Benin City bronze casters and artists, Zeickner-Okoro wanted to change the terms of the debate by offering the museum contemporary artworks untainted by any history of looting.

“Part of the crime that's been committed is that Benin has been portrayed as this dead civilisation,” he said. “The reparation is not just returning the Bronzes. It's also acknowledging us, that we're a living civilisation.”

Seventy-five children who were kidnapped from their school in Nigeria's northwestern Zamfara state have been released after their abductors came ...
Africa
9 months ago

He said the museum had also said it would buy other works by Ahiamwen artists, including a life-size ram made from spark plugs by Kelly Omodamwen, some Benin women's heads by Andrew Edjobeguo and works by sculptors Ugodo Matthias and Ikolor Osas.

“It's historic, it's really significant. I think it's definitely going to open the door for the return of the loot,” said Zeickner-Okoro.

The British Museum did not respond to a request for comment.

Germany has said it wants to return Benin Bronzes from its museums to Nigeria. The British Museum, which holds the largest and most significant collection of the items, has made no clear commitment despite demands from the Oba, or king, of Benin.

The governor of Rivers State in Nigeria's Delta region said he may be forced to reimpose COVID-19 lockdown measures if residents did not comply with ...
Africa
9 months ago

It says on its website it is “committed to active engagement with Nigerian institutions concerning the Benin Bronzes” and speaks of “new opportunities for sharing and displaying objects from the Kingdom of Benin”.