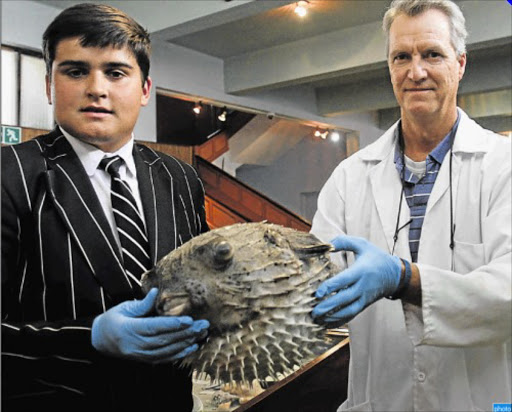 The teenager had gone fishing with friends when he discovered the rotund fish.

“We are part of a caravan club and were camping at Morgan Bay, when Callum went fishing with a group,” said his mother, Kerry Kretzmann.

“One of the dads saw the fish and Callum went to investigate. He immediately brought it back to the camp-site where it attracted a lot of attention.

“Even the staff came over to have a look because no-one had seen such a big one. We thought it was a puffer fish.”

When her “fishing mad” son indicated his wish to dry out his find and suspend it from the ceiling of his room, Kretzmann contacted Siani Tinley of the East London Aquarium to ask for permission.

“I sent her a photo and she said she wanted to show it to the museum because it could be something special, so we wrapped it in hessian, put it in a cardboard box and took it home.”

East London Museum principal scientist Kevin Cole identified the find as a 55cm porcupine fish (Diodon Hystrix) and said it was rare to find such a large specimen.

The museum’s fish specialist Greg Brett said while juvenile porcupine fish drifted in the open ocean, adults settled in sub-tropical and tropical reefs off the KwaZulu-Natal coast and northwards.

He said it was possible the porcupine fish, which inflates itself and has spikes similar to a porcupine for protection, got lost or chased by a shark before being washed into the Agulhas current and onto the shore. — barbarah@dispatch.co.za