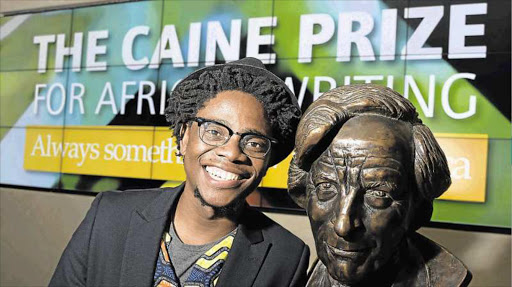 Mqombothi was awarded the prestigious award for his short story Memories We Lost, which was published in the anthology Incredible Journey: Stories That Move You.

The 30-year-old – who was the only South African among five writers shortlisted – took home R200000 as this year’s winner.

On top of the R200000 Mqombothi will also have the opportunity to take up a month’s residence at Georgetown University as Writer-in-Residence at the Lannan Centre for Poetics and Social Practice.

He will also be invited to speak at the Library of Congress.

The other shortlisted writers will each receive R10000.

Mqombothi’s short story, Memories We Lost, tells the emotionally charged story of a girl who acts as the protector of her sister, whose mental health problems cause consternation in a South African village.

Her situation deteriorates as her care is entrusted to Nkunzi, a local man who employs traditional techniques to rid people of their “demons”.

Mqombothi said the story was not inspired by one event but a succession of things – from conversations with friends and books he read to memories of how people in his village spoke about and dealt with mental illness.

Mqombothi said the shortlist had great writers and he was glad he was not one of the judges.

“I loved every one of the stories, and think all of the writers are lovely. The five stories that are shortlisted always stand an equal chance to win,” he said.

He said winning was exciting, as it would promote his short story to a wider audience.

“And that’s what every writer wants, for more people to read their work. It is exciting to win but one is also thrust into an unfamiliar territory, in which the attention can be overwhelming,” he added.

One of the judges, Delia Jarrett-Macauley praised the story, saying: “The winning story explores a difficult subject – how traditional beliefs in a rural community are used to tackle schizophrenia.

“This is a troubling piece, depicting the great love between two young siblings in a beautifully drawn Eastern Cape.

“Multilayered and gracefully narrated, this short story leaves the reader full of sympathy and wonder at the plight of its protagonists.”

The author, who has published non-fiction work online, said that growing up he was convinced he would be a radio personality.

He studied versatile broadcasting at Border Technikon before it merged with other tertiary institutions to form Walter Sisulu University, but later discovered writing and filmmaking.

He then started writing poetry and went to film school. — poliswap@dispatch.co.za