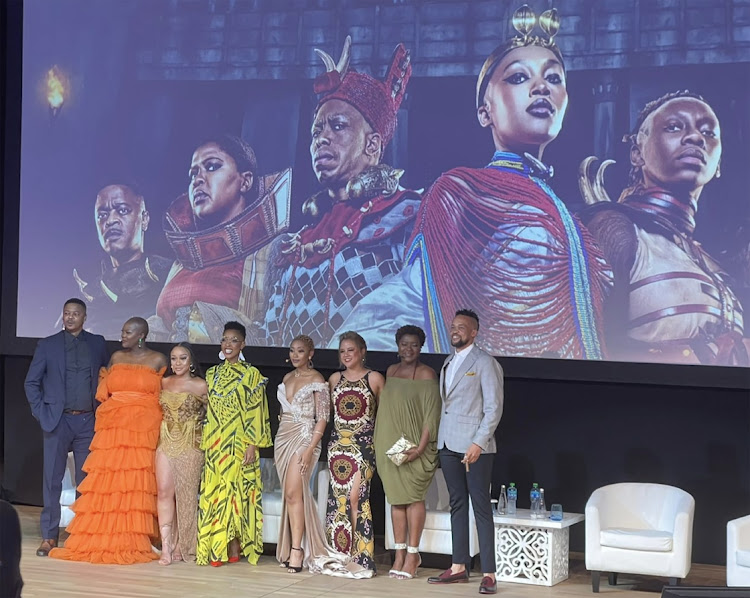 The lead cast and creators of ‘Blood Psalms’ before the premiere of the series at the Expo 2020 in Dubai. Parts of the African fantasy were filmed in the Eastern Cape. The production was created by acclaimed film duo Jahmil XT Qubeka and Layla Swart. Qubeka said the series would show from February next year.
Image: GUGU PHANDLE

Lights, camera, action! A red carpet was rolled out in the United Arab Emirates for Blood Psalms, the much anticipated ancient epic series which was partially shot in the Eastern Cape and created by a son of the soil.

Jahmil XT Qubeka and producer Layla Swart of Yellowbone Entertainment introduced their 10-part series based on SA’s pre-colonial history to an excited audience at the Expo 2020 Dubai on Tuesday.

The creative duo took on a mammoth task when they started shooting during the Covid-19 lockdown in 2020 with a cast of close to 50 speaking roles. The production employed 1,000 South Africans.

The much-anticipated Blood Psalms, a Showmax Original, was introduced to the world during Expo 2020 in Dubai. Parts of the series were shot in the Eastern Cape and created by acclaimed Mdantsane Filmmaker, Jahmil XT Qubeka, who said viewers can expect the show in February 2022. pic.twitter.com/GPtDOmN95B

Sodlaka plays Sithenjwa, mistress of the great senator of Nziwemabea, and is a woman set to get justice “by any means necessary”.

In the show, Xaluva is Toka, an ambitious soldier who ascends to power, becomes an army general and marries Sithenjwa.

Tuesday’s audience saw snippets from the Showmax Original to whet the appetite.

Blood Psalms came out of a specific desire to understand "ourselves and our heritage".

The show is true African mythology, with magic, sorcery and power struggles between different kingdoms depicted in a highly detailed film set built especially for the series.

Parts of Blood Psalms were shot at Hole in The Wall in Coffee Bay and Gwadana.

It was first big production to shoot during the pandemic in SA.

Swart said the locations in the province were a spiritualised experience which spoke to the nature of the show.

“The Eastern Cape was always a primary focus for us. It is a region we believe offers so much in terms of talent and is so underused.

“What has been fantastic is that by tapping into the Eastern Cape there has always been something different about the work we put out.”

Swart said Blood Psalms came out of a specific desire to understand “ourselves and our heritage”.

Qubeka said seeing the production come to fruition was a dream come true.

“In fact, there are no words to describe the feeling. I live for this, I live for the work, and to see it fully realised is everything to me.”

Qubeka said part of the inspiration to write the script stemmed from the lack of African archetypal heroes in the contemporary storytelling space.

The much-anticipated Blood Psalms, a Showmax Original, was introduced to the world during Expo 2020 in Dubai. Parts of the series were shot in the Eastern Cape and created by acclaimed Mdantsane Filmmaker, Jahmil XT Qubeka, who said viewers can expect the show in February 2022. pic.twitter.com/ZKsLQ1aUkH

“It is important that we see ourselves in projections, not just in our current situations but in our possibilities. The main mission was to bring back heroes again,” Qubeka said.

The lead actor, Bokang Pehalane, who plays the role of Princess Zazi — a fierce teenage African queen who battles a world-ending prophecy to navigate her people through complexities, politics and endless wars — was also present in Dubai.

Think Game of Thrones but in an ancient mystical African setting where kingdoms and queendoms battle it out for the ultimate seat on the ...
Lifestyle
1 year ago

The cast and creators led a panel discussion which dissected some of the roles and the series’ themes.

The panel included Thando Tabethe who plays God Heka, a manifestation and physical representation of magic and the only one who can give power and prophecies over the characters.

Faith Baloyi plays the role of Queen Assilli who is the King’s magician and adviser and the representation of the world of magic and supernatural realm in the story.