Video: Stripping for good cause 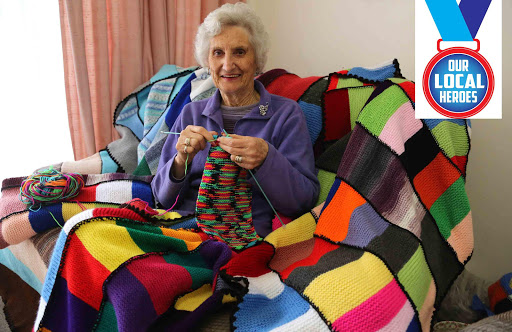 Stripping is alive and well among the ladies of Kennersley Park old age home in Beacon Bay.

A group of woman known as the Kennersley Park Strippers crochet “strips” of wool used to create blankets that are in turn donated for charity.

The idea was the brainchild of Rosemary Hare-Bowers who moved to the facility in 2010.

Hare-Bowers said she had been knitting all her life and had donated more than 700 blankets to St Bernard Hospice since 2004.

At Kennersley Park, she uses the knitted strips to make the blankets.

“There are many women who have time on their hands because we sit around waiting to die,” she said.

“So I engaged with others to come on board and start knitting for a cause.”

Hare-Bowers – who knits for hours daily – said the group was not exclusive: “If you knit your strip of 30 stitches by a metre, you are a stripper.”

She said she had once been collected to visit Hospice.

“A lady on her death bed had requested to see me to thank me for the blanket she had received which was made by me.”

Hare-Bowers said the woman had asked for her consent to be buried with the blanket because she believed God had sent her to make the special blanket.

“From that moment I was further inspired to knit because I knew these blankets meant a lot to their recipients,” she said.

The former businesswoman, who owned shops in villages around King William’s Town, said the blankets were uniquely made with whatever wool was available.

“There is not a single blanket that is made like another because different people have knitted it and different coloured wool is used.

“Children who have been abandoned are often comforted and told that they are as unique as the blankets and very special.”

She said that on one occasion when she delivered blankets to a village, a young boy was excited to receive it but kept asking when he would have to return it.

“The boy was so used to sharing but when I had assured him that nobody would take it away from him he hugged the blanket and said: ‘Yeyam! ’.”

Stripper Eve Leach, 84, who has been part of the team for more than two years, said she jumped at the opportunity to make a difference.

“It was a chance for me to give back and support needy children.”

St Bernard’s Hospice CEO Rene Wienekus confirmed that women from Kennersley Park were among the many who donated knitted blankets for the Hospice.

“There are 511 orphans and vulnerable children we visit and whenever there are blankets available we take them with on the home visits and they are very appreciated.

“However, wool has become like diamonds, it is hard to find and we appeal to the public to please donate any kind of wool they may have.”

Hare-Bowers invited any volunteer strippers to knit 30 stitches by a metre and become part of the movement. — mbalit@dispatch.co.za