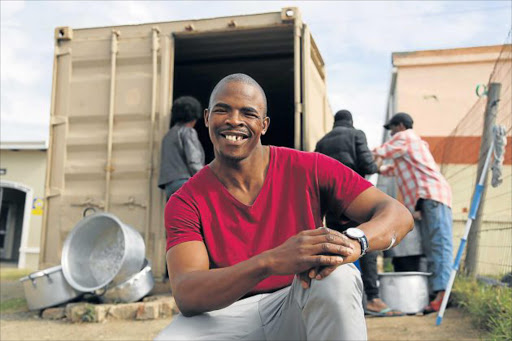 COMMUNITY HERO: Duncan Village resident, Sizwe Yolo, says as a youngster he used to beg on the streets and got involved in crime at a very young age – until he started going to church. He has since reached out to his local community by feeding many hungry mouths in his neighbourhood through his soup kitchen Picture: MARK ANDREWS

Born into an impoverished life in East London’s Duncan Village, Sizwe Yolo was surrounded by crime, hunger and substance abuse.

But like a rose among thorns, he grew up to be a symbol of hope and redemption for many.

He went from being a beggar to now feeding more than 200 people through his Shalom Nutrition Development soup kitchen, where the elderly are also taught sewing and knitting.

“As a young boy growing up in such an area, life wasn’t easy. My surroundings weren’t great,” said Yolo, who celebrated his 33rd birthday yesterday.

With an unemployed mother, he often did not know where his next meal would come from and resorted to begging.

As a young boy, he remembers how instead of being in school like his peers he would go into town to stand on street corners and shop entrances to beg for money and food.

“That was the life I got to know at the time. Begging became a way to put food on the table. We sometimes stayed in town overnight, only going back home the next day. I witnessed a lot at a very young age,” he recalled.

An experience Yolo cannot forget, is the day police allegedly shot at him and fellow beggars while they were walking back from town.

He escaped death when the bullets went through both his hands, narrowly missing his lower body. “I was a little boy, but I still remember everything vividly.”

He said that experience brought with it the craving of a different life. “I didn’t want this life for myself.”

He went back to school and persevered even though he was sometimes ridiculed for being older than his classmates. “I found myself loving school but I was still exposed to a life of crime. I soon became involved with drugs, alcohol and weed.”

The begging continued. It was on his escapades in town with friends that he met the people who would change his life forever.

“I met people who introduced me to Christ. My heart became captured by the Lord.”

Yolo said his love for church grew and became his redemption.

He found employment at Vincent Spar as a merchandiser. Today, Yolo is the assistant supervisor.

He started a soup kitchen at the backyard of his home where he feeds his neighbours.

Help came and his dream of feeding the hungry grew.

His yard soon became too small to accommodate his feeding scheme and he now operates the feeding scheme from the Roman Catholic Church premises in Duncan Village.

“It fills me with so much joy to see people getting fed,” he said.

“I am fulfilled knowing that as I eat at home my neighbour also has food to eat.”

The former junior provincial boxing lightweight champion also encourages the youth in his area to take up sports and recreational activities.

“I didn’t know that one day I’d be involved with helping others.

“It’s what makes my life. A little difference has brought a significant turnaround to my community.”— nonsindisoq@dispatch.co.za