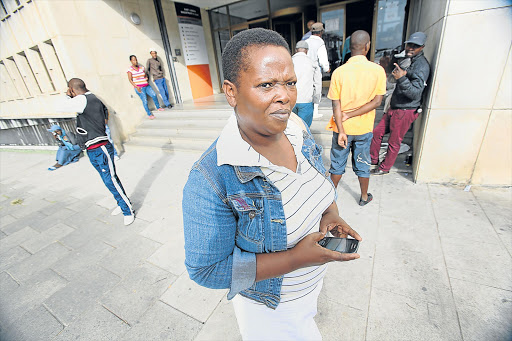 THE ACCUSED: Ncediswa Mkenkcele leaves the East London Magistrate’s Court yesterday, where she was released on warning Picture: MARK ANDREWS
Hidden camera footage  of a nurse punching and kicking an elderly woman at an upmarket frail care home has revealed the full extent of the brutal beating.

The sustained assault left 84-year-old Lily Kirchmann resident Hope Shepherd with severe injuries including a black eye and extensive bruising to her body.

Shepherd last year suffered an unexplained broken arm, which led to her family installing a secret camera in her room. She was unable to speak of or write about what was happening to her.

Yesterday, Ncediswa Mkenkcele, 40, appeared in the East London Magistrate’s Court facing charges of assault with intent to cause grievous bodily harm. She was not asked to plead and the case was postponed until June 5 for further investigation.

She was released on warning.

Mkenkcele of Duncan Village was employed as a caregiver and resigned soon after the footage surfaced.

The hidden camera was placed inside a television set in Shepherd’s bedroom on December 31 by her daughter Bernice Robertson, who became suspicious of her mother’s constant and unexplained injuries.

When visiting her mother in February, Robertson noticed her mother had a black eye and immediately downloaded the footage.  Clips show the assaults, which took place on February 3 and 23.

In the video, seen by the Daily Dispatch, Shepherd is  assaulted with open hands, fists and elbows by a caregiver. In one clip the caregiver stops the assaults to close the door and curtains in Shepherd’s room before she continues assaulting the frail pensioner, even dishing out a fly-kick to the stomach.

Shepherd’s feeble attempts to fight back are met with more violence. She is grabbed by her hair and  roughly thrown down on her bed, where the assault continues. In another clip the caregiver is seen smashing her elbow into the elderly woman’s head and back.

The footage also shows the woman taking a deodorant can and bashing it against Shepherd’s head, before spraying its contents into a breathing hole in Shepherd’s throat. The elderly woman suffers from throat cancer.

She was arrested at her home in Duncan Village after Cambridge police viewed the hidden camera footage.

Robertson has since removed her mother from Lily Kirchmann, where she had been paying R14000 a month.

Police spokesman Captain Mluleki Mbi said: “We welcome the fact that the docket is going to be sent back to us with recommendations. The prosecutor might have felt that, as things stand, we don’t have a watertight case and wants us to do more.”

Outside court a neatly dressed man and woman attempted to shield Mkenkcele from a Dispatch photographer. The man, walking next to her, had organised for a meter taxi to pick Mkenkcele up near the entrance, and it sped away with her.