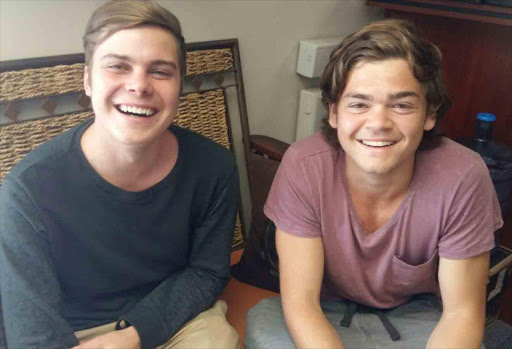 NOT GUILTY: Aaron Mack and Chad de Matos, both 20, who have spoken out for the first time about being wrongly accused of attacking a female cleaner at Tiger Tiger night club in Cape Town. All charges against them were dropped, but not before they were vilified by mainstream and social media Picture: BARBARA HOLLAND
Two young men who were charged with attempted murder in what was portrayed as a racist attack on a female cleaner outside the Tiger Tiger club in Cape Town, have spoken out for the first time since charges against them were dropped in February.

Chad de Matos, and Aaron Mack, both 20, said they had been vilified by both mainstream and social media, forcing them to go into hiding to avoid further fallout from the tumultuous charge of attempted murder of which they said they were entirely innocent and for which they spent a harrowing night in the notorious Pollsmoor Prison.

This follows the headline-grabbing case of October last year in which three former Selborne schoolboys were charged with beating shopping centre cleaner Delia Adonis during a fracas outside Tiger Tiger nightclub in Claremont, Cape Town.

Two of their friends were not charged and their names were not reported.

Mack, who had been sharing a Kenilworth flat with De Matos and Mitchell Turner while on a gap year, admitted there had been a “bit of a beef” between his group and other men at the club, which had spilled out into the shopping centre and then the parking lot.

But both he and De Matos, who had been sleeping in a car, denied they had assaulted Adonis. Their version of events was later backed up by investigations carried out by well known East London PI Christian Botha.

However, the boys were later arrested and placed in court holding cells where they were going to face charges of attempted murder. They were devastated when they were denied bail and carted off to Pollsmoor.

“I went numb and the possibility of rape crossed my mind,” said Mack

“We had to strip and were sent to the cell of about 30 men,” said De Matos. “Luckily one of the prisoners we met in the holding cell gave instructions to his gang member friend in our cell to protect us and he took us to a corner.”

The men spent the night in the cell that “stank of sweat and concrete”.

“It was terrible being there. The hardest part was knowing we were there for no reason,” said Mack.

But the biggest hurdle was yet to come.

Online newspaper articles were soon shared on social networks and the men became the the victims of vicious social media attacks.

Branded racists who should rot in hell and white trash who deserved to be raped in jail or beaten up, the men took refuge in their flat.

De Matos, who was named one of UCT’s top students last month in a Golden Key ceremony, stopped attending lectures and completed his first year online. “I’m a very mellow guy and didn’t want to expose myself to negative energy.”

When the men returned to East London for their summer holiday, their parents instructed them to keep a low profile for fear of attack.

“We were forced to live as if we were guilty criminals,” said Mack.

And, while their parents bemoaned the repercussions the barrage of negative online content would have on their career prospects, De Matos and Mack said they preferred to take a positive approach.

“I don’t want to dwell on this. I just want people to know the truth and know the kind of person I am. I am a good person, not a racist,” said Mack.

East London property developer Mark Povey, who is the step-father of one of the men who was not named in the case, took the matter of inaccurate reporting up with the press ombudsman, who has directed a Cape Town daily to apologise for, among other things, continuing to refer to Adonis as a “victim” regardless of the court’s decision to the contrary and for unfairly portraying the three men in a negative light. — barbarah@dispatch.co.za