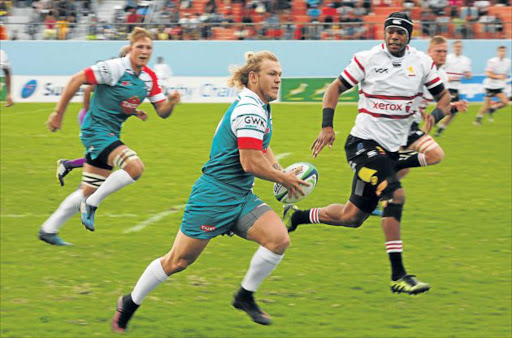 IN CONTROL: Christiaan Meyer of Griquas, with ball in hand, is chased by Fabian Booysen of the Lions during the SuperSport Rugby Challenge semifinal held at the Sisa Dukashe Stadium in Mdantsane Picture: RANDALL ROSSKRUGE
A breathtaking day of SuperSport Rugby Challenge action was battled out at the Sisa Dukashe Stadium yesterday and ended with DHL Western Province and the Tafel Lager Griquas progressing to the inaugural final of the competition.

Two very exciting semifinals were competed as well as a cracking club match in the morning and all three games on the day went down to the wire, thrilling a most appreciative crowd.

Western Province closed out the day’s play with a 28-24 win over fierce rivals, the Vodacom Blue Bulls, while Griquas upset favourites, the Xerox Golden Lions 33-21 in the earlier semifinal.

In the day’s final match against Province, the Bulls took the lead in the 11th minute as outside centre Dries Swanepoel went over for a try, with flyhalf Joshua Stander adding the conversion.

Province then drew level in the 18th minute when captain Eital Bredenkamp powered his way over the line with two players hanging on.

Coleman then put Province ahead two minutes later with a penalty, but they then had lock Jurie van Vuuren yellow-carded for a high tackle in the 22nd minute to reduce them to 14 men.

The Bulls then retook the lead in the 30th minute after a good chip and chase saw replacement back Franco Naude run in untouched for a converted score, while Coleman reduced the deficit to a point at the break with his second penalty.

A scrappy start to the second half then saw Stander and Coleman trade penalties in the 56th and 59th minutes, before Province scrumhalf Godlen Masimla finished off a great attack under the poles, with Coleman’s conversion putting them 23-17 up.

The Bulls then hit back through wing Dewald Naude to retake the lead three minutes later. However, the final score of the game went to Province eighthman Jaco Coetzee, who smashed his way over for an unconverted try.

In the earlier semifinal the Griquas emerged victorious after an almighty tussle against the Golden Lions.

It was a game of two halves as the Griquas absolutely dominated the first half, taking a massive 27-0 lead into the half-time break.

Bbut the Lions came back fighting in the second half, reducing the deficit to six points, before two late penalties gave the Griquas breathing room.

“I am very excited and very proud of the players, we spoke about it all week, just sticking to our game plan,” Griquas coach Peter Engeldow said.

“With the Lions and their great counter-attacking ability, we said we just needed to keep hold of the ball and the gameplan worked especially well in the first half, but then we struggled a bit in the second.”

Griquas wing Ederies Arendse opened the scoring in the 10th minute, with flyhalf George Whitehead slotting the conversion for a 7-0 lead.

Whitehead then added two more penalties to put the Griquas 13-0 up after 31 minutes, before two converted tries in the last five minutes to prop Ewald van der Westhuizen and flank Sias Koen gave them their lead at the break.

The Lions then came out all guns blazing in the second half and brought themselves within striking distance with a three-try 10-minute blitz from the 48th to 58th minute.

First flank James Venter went over in the right-hand corner before wing Madosh Tambwe broke down the right hand touchline and under the poles to score his first, before another runaway try saw him claim a second, while flyhalf Shaun Reynolds slotted all three conversions.

At 27-21 with 22 minutes still to be played it was game on, but the Griquas superbly held their nerve, defending their line brilliantly to fend off any Lions attack.