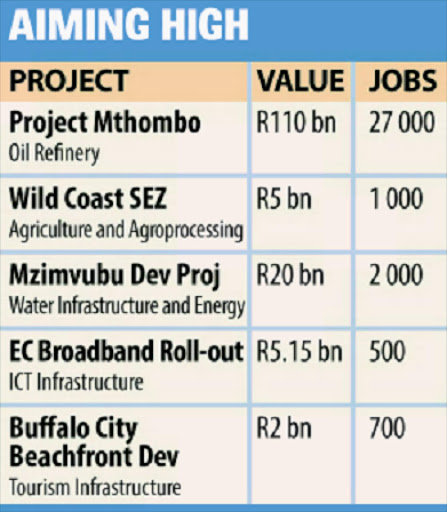 Screen Shot 2018-02-08 at 1.56.52 PM
The ANC wants the Bhisho government to prioritise several multibillion-rand development projects this year, which will see thousands of jobs created once construction starts.

These include a R20-billion Mzimvubu multipurpose development, a R2-billion Buffalo City beachfront development, a R14-billion provincial government office precinct project and a R5-billion agro-processing project on the Wild Coast.

The Dispatch has seen a report that ANC provincial secretary Lulama Ngcukayitobi tabled at the recent ANC lekgotla in which the party gives a detailed assessment of premier Phumulo Masualle’s performance as the provincial government’s leader.

In it, Ngcukayitobi highlights the need for the state to speed up construction of a R110-billion oil refinery project in Mthombo and the controversial R5.1-billion Eastern Cape broadband rollout.

Ngcukayitobi said: “The current risk is that various SOEs including Transnet and Eskom have mobilised their resources to progress project development work in the Richards Bay area, which poses a risk for the Coega area, as state funding could be used to justify taking this project to where there is more project development.

“The Eastern Cape province seeks to activate an effective and impactful intervention to influence the advancement of the refinery project at Coega,” he added.

The ANC announced yesterday that if things went according to plan, there would be a provincial cabinet shakeup which might affect the premier because of strained relations between his office and Calata House.

However, this could be delayed due to a pressing issue of national importance – the possibility of President Jacob Zuma resigning as head of the state.

Ngcukayitobi, in an interview with the Dispatch, said “whoever” delivered the state of the province address (Sopa) later this month would have to give a full account of progress made in these projects, because they were not new. He singled out Mzimvubu and Mthombo, as well as a proposed new rail link between East London and Durban.

Masualle was busy yesterday consulting communities for his tabling of the Sopa next Friday.

But the event has been shelved indefinitely after Speaker Baleka Mbete’s announcement on Tuesday that Zuma’s state of the nation address (Sona) had been postponed indefinitely. Provinces tune their priorities to the Sona.

The premier, in the provincial address, would also have to give a detailed account of the Bhisho government’s plan to build new towns in areas such as Coffee Bay and construct a new port in Port St Johns.

These were some of the multimillion-rand development projects that Masualle mentioned when he delivered his Sopa last year.

Ngcukayitobi said: “Last year, the premier talked about the establishment of the new ports in line with the oceans economy.

“We expect the premier will be able to report back about these particular establishments in Port St Johns and other areas and the new towns that were going to be established in areas such as Coffee Bay.”