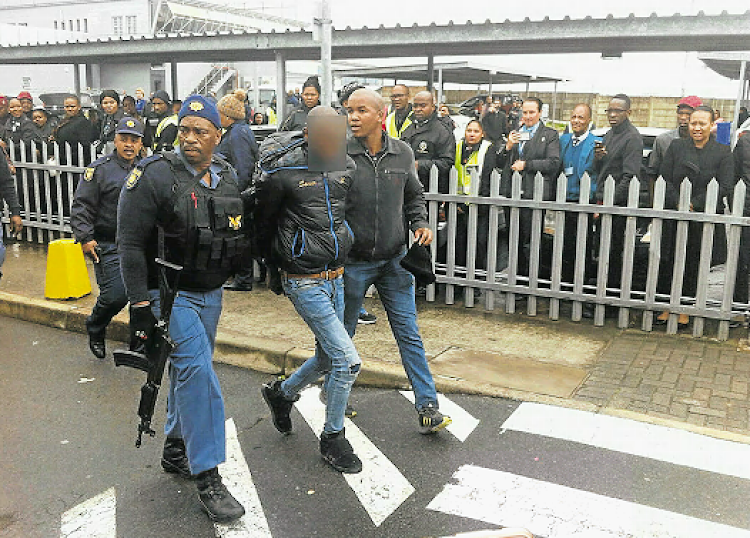 One of two men believed to be behind the death by shooting of a top Beacon Bay police detective was arrested after they were found hiding inside the ceiling of out at the East London Airport on Tuesday morning.
Image: Supplied

There was drama at the East London Airport on Tuesday when men suspected of gunning to death a top Beacon Bay detective tried to fly out of the province.

The airport was evacuated for about 30 minutes as teams of police hunted down armed men who were apparently hiding out in the airport after dropping off a rented car. One of them made it into the ceiling.

The two are believed to be behind the killing on Sunday of Beacon Bay investigating officer Detective Sergeant Simphiwe Sahluko, 42.

According to Airports Company SA (Acsa) spokesperson Senzeni Ndebele, the two men had just dropped off a rented car when the police pounced.

Eastern Cape Hawks spokesperson Captain Anelisa Feni confirmed that the men, both aged 30, were arrested while returning a rental car.

Feni said they will appear in the East London magistrate’s court on Thursday.

The men were tracked down by the SAPS provincial tracking team, the public order policing unit and the dog unit, she added.

Sergeant Sahluko was stationed at Beacon Bay and was slain on Sunday at 8pm in Nompumelelo township, Beacon Bay.

Ndebele said the decision to evacuate the airport was made at 8.55am, when it was confirmed than an armed person was hiding from the SAPS somewhere in the “ceiling”.

Ndebele said the armed man hiding in the ceiling was “detained and removed within 10 minutes of the evacuation of the terminal building”.

“The suspect was recognised when he entered the terminal building,” Ndebele added.

She said processes established in conjunction with the SAPS and security staff worked as intended.

“Passengers were not at risk at any stage of the SAPS activity and the airport returned to its normal operations in a relatively short time.”

An emotional Eastern Cape police commissioner Liziwe Ntshina, still mourning the massacre of five policemen in Ngcobo in February, said on Tuesday: “Stop killing my children. You can shoot me instead. These policemen and women are like my children, so you can imagine the pain I am feeling. I would like to appeal to the communities by saying the police officers belong to our communities – they are the brothers, sons, sisters and mothers in our communities.”

Ntshinga commended the swift action of the police.