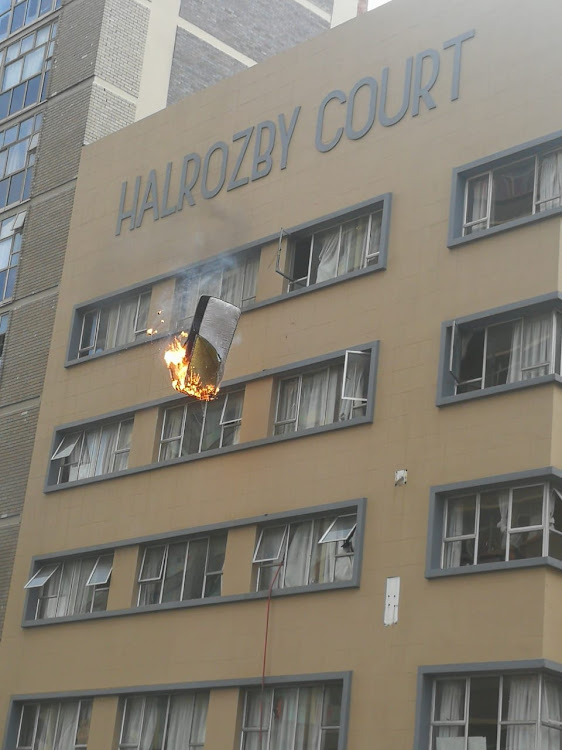 UKZN students burned their mattresses on Monday in protest against their uncomfortable old beds
Image: Supplied

Fed up with the poor condition of their beds, University of KwaZulu-Natal (UKZN) education students have resorted to setting them on fire.

Students at a university residence in Hospital Road, near Durban’s South Beach, burnt the metal frames of their beds on Sunday night to voice their dissatisfaction.

On Monday morning, burning mattresses were seen being flung out of windows at the residence, occupied by education students from the UKZN's Edgewood campus. The protest resulted in lectures at the campus being cancelled.

Twelve Fort Hare University students were arrested for vandalism at the University’s Alice campus on Friday, police have confirmed.
News
2 years ago

Student representative council (SRC) president Sanele Hlongwa told TimesLIVE that they set their beds alight because they could no longer sleep on them.

"For ages now, students have been asking that their beds be changed. The building at Hospital Road is a university-owned building. The university has changed the beds at residences on campus. The same must be applied to off-campus residences," said Hlongwa.

"The students are saying the institution is also responsible for them, because there is no landlord. Those beds have metal bases which are extremely uncomfortable. Only mattresses have been changed in the past, not the entire bed.

"Students are saying they are fed up and they want new beds like the ones that are on campus."

Hlongwa said the university was considering ordering new beds for about 176 aggrieved students. He added that all UKZN campuses except Edgewood were operating normally.

UKZN spokesperson Normah Zondo said management was aware of the protest action at the residence in Hospital Road. "Unfortunately the students have not communicated their grievances as yet," she said.

Zondo said a residence inspection team, including SRC members, has been put in place at each campus to address residence matters. "A plan of action has been agreed to with respect to critical housing challenges, which is currently being implemented," she added.