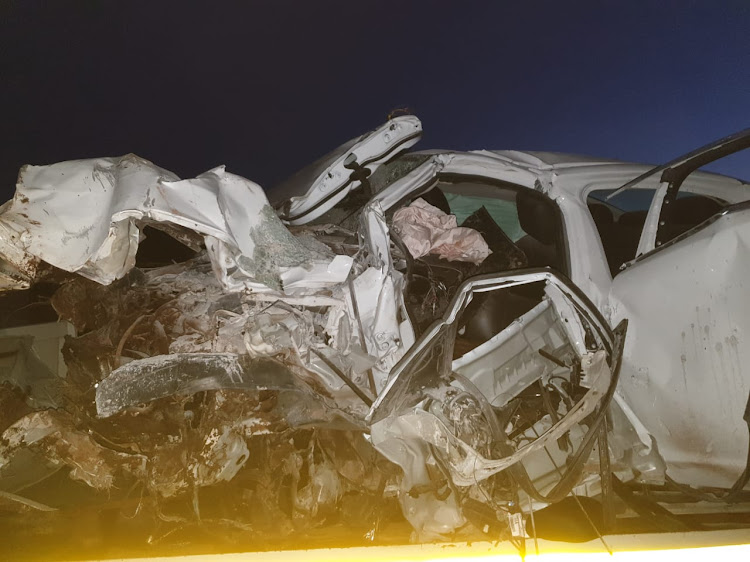 The wreckage of the white Jaguar
Image: SUPPLIED

Andrew Turnbull has died after succumbing to injuries sustained in a car crash. Two others were killed in the horrific  collision outside Port Alfred on Sunday afternoon.

"Andrew our only son and brother to Lindy passed away in the early hours of this morning in PE due to serious injuries from a car accident.. His friend Ryan Byrne died at the scene. Please I'm am begging everyone to please give us time to mourn and to stop the horrible stuff that is being posted on FB. We are heartbroken," his mother, Martha Turnbull posted on Facebook on Monday morning.

Andrew Turnbull and two other people died after a gruesome car crash on May 12 2019 in the Eastern Cape. Turnbull became infamous after being accused of assaulting his former girlfriend Chere Gray in August 2018. He was released on bail in October 2018.

According to transport department spokesperson Khuselwa Rantjie, the collision occurred on the R72 near Port Alfred in the direction of Kenton-On-Sea.

"A Mercedes Benz with two occupants, including the driver, was travelling from Port Alfred and collided with a Jaguar travelling from Kenton. The number of occupants in the Jaguar has not been confirmed."

On Sunday night, the Dispatch confirmed the Jaguar belonged to Andrew Turnbull.

"It's alleged that driving at high speed may have contributed to the incident. Local authorities will continue with further investigations," Rantjie said.

On social media, a video alleged to have been taken by the passenger in Turnbull's car, showed a reading of 260km per hour on the vehicles speedometer.

Turnbull was out on bail after being accused of assaulting his former girlfriend‚ Chere Gray.

The son of a wealthy East London family, Andrew Turnbull, was arrested in Johannesburg on Tuesday and charged with possession of drugs. The arrest ...
News
2 years ago