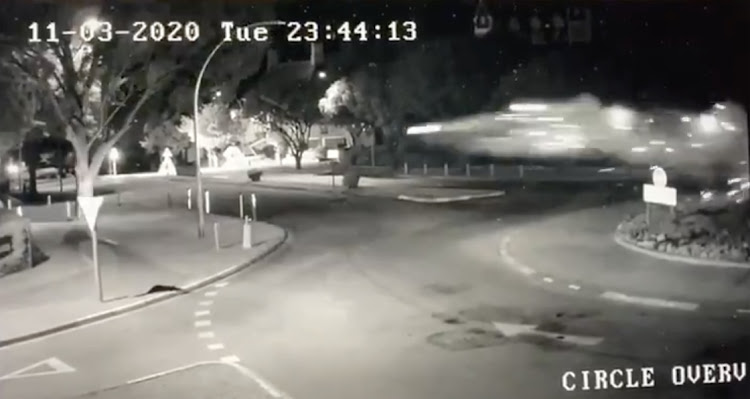 A man was seriously injured in Makhanda (formerly Grahamstown) late on Tuesday night when he appeared to lose control of his car at a traffic circle before smashing into the garden wall of the historic St Andrew's College school chapel. A street camera captured the dramatic moment in which the car is seen soaring high over the traffic circle outside the school before smashing into the chapel.
Image: DISPATCHLIVE

Police have opened a case of reckless and negligent driving against a Makhanda driver whose car was caught on camera flying at least 15 metres through the air before crashing into the garden wall of the historic St Andrew’s College (SAC) chapel.

The dramatic video footage went viral on social media and other platforms this week.

The Somerset Street camera poised on the edge of the traffic circle outside SAC shows the car already airborne when it comes within the camera’s view.

It appears to soar at high speed over the large traffic circle with sparks flying behind it and nosedives dramatically into the stone garden wall surrounding the beautiful Herbert Baker-designed chapel.

The chapel itself was not damaged.

It is understood the driver was returning from the 6 SA Infantry army base just north of the city after dropping off a friend there. He reportedly hit the pavement as he approached the traffic circle in Somerset Street heading towards the CBD. The airbags deployed and he lost control of the vehicle which then crashed into the wall.

His car was badly damaged.

He was taken by police to the SAPS service complaints centre. Police then insisted that a relative who had accompanied him take him to hospital after they noticed he was bleeding from the ears and appeared disorientated.

He was admitted to local Settlers Hospital in Makhanda for treatment.Govender confirmed that police had opened a case of reckless and negligent driving against the driver.​

A man was seriously injured in Makhanda (formerly Grahamstown) late on Tuesday night when he appeared to lose control of his car at a traffic ...
News
1 year ago