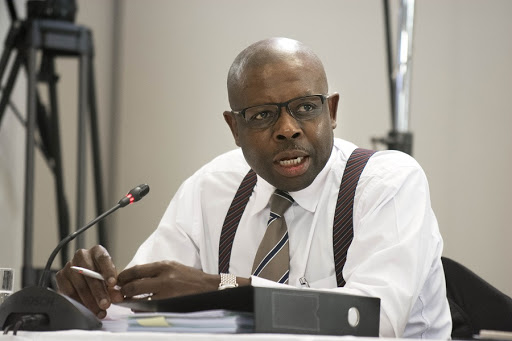 Western Cape judge president John Hlophe will remain on the bench until the Johannesburg high court delivers judgment in his challenge to the decision that he was guilty of gross misconduct.

Hlophe on Tuesday abandoned his urgent interim court bid to prevent his suspension after the Judicial Service Commission (JSC) said there was no immediate threat that he would be suspended.

In an affidavit ahead of the urgent hearing on Tuesday, JSC secretary Sello Chiloane said President Cyril Ramaphosa could only suspend Hlophe “under the advice of the JSC” – but the JSC had not given any such advice.

“It will not do so, until this application is heard and judgment is delivered,” said Chiloane, referring to the high court challenge.

Hlophe was found guilty of gross misconduct by the JSC last month for a 2008 complaint by all the then justices of the Constitutional Court, who said that he had sought to influence the outcome of cases pending before the highest court connected to corruption charges against former president Jacob Zuma.

The guilty finding has been forwarded to parliament for possible impeachment proceedings. In the meantime, the constitution allowed for the JSC to recommend suspension by Ramaphosa – prompting Hlophe’s urgent approach to court.

Mapisa-Nqakula says parliament will abide by court decision on Hlophe

Chiloane said the JSC had decided by majority to postpone a meeting to advise the president about suspending Hlophe, pending the litigation.

“It does not intend to do so until this application is decided. This must not be understood to include appeals, however,” said Chiloane, adding that the JSC reserved its rights to “take appropriate action” once a judgment had been delivered by the high court.

The court said the parties would meet to agree to an expedited timetable for Hlophe’s challenge to the JSC decision to be heard.

Deputy judge president Roland Sutherland also grilled Hlophe’s counsel Thembalihle Sidaki about a letter from Hlophe’s attorney that requested that his case be heard by a judge from another division – because Hlophe had alleged that Gauteng judge president Dunstan Mlambo, who also sits on the JSC, was conflicted or biased against him.

Every man for himself: where’s Zuma to help you now, Hlophe?

Unfortunately for the fallen ones, the former president is too busy fighting his own battles to help them
News
8 months ago

Sutherland quoted the letter as saying that, because Mlambo was “implicated” in the review application, this resulted in the “inability of any judges in his division to hear this matter".

Sutherland said: “Is that seriously made? Do you think that all the judges of the Gauteng division constitute a swarm of minions who are in thrall to the judge president and who go about sucking up to him on each and every thing he has a whim about?”

Sidaki replied that he could only say that the content of the letter was “unfortunate”.

“Yes, well that may be the only relevant remark to be made about the request,” said Sutherland.

He said the case would be heard by a judge in the Gauteng division. However, if Hlophe wished to seek the recusal of the judge assigned to the matter, that was a different matter and could be dealt with at the time.