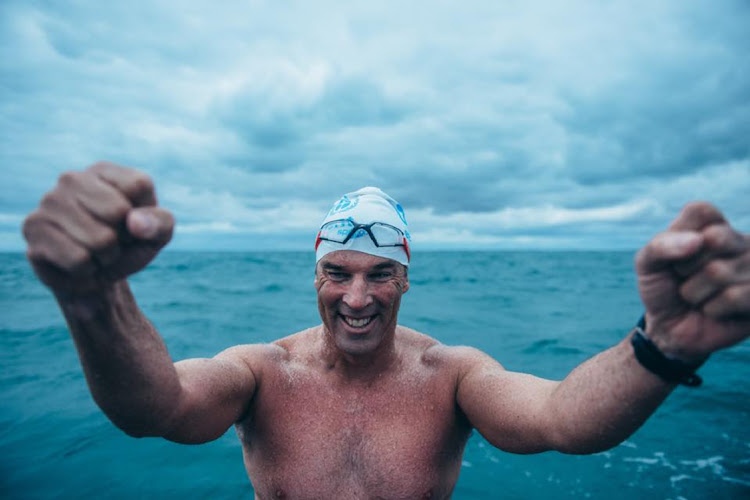 Lewis ‘Iceman’ Pugh, international climate advocacy ocean swimmer, is the first celebrity to back efforts of people on the East Coast and Wild Coast to stop seismic blasting. He used his foundation to promote a protest documentary created by Nahoon ocean swimmer and former deaf SA champion Mark Roach which has scored thousands of hits online.
Image: FACEBOOK

Eastern Cape fury over Shell’s November seismic blasting of the Wild Coast and off Gqeberha is ringing in ears around the world.

Lawyers, scientists and activists have pored over the 2013 authorisation and say they have found shortcuts and holes and that the department of mineral resources & energy turned a deaf ear to scientific warnings about major injuries and harm to marine life, among them up to 38 species of cetaceans — whales and dolphins.

It was stated in the authorisation papers that the impact on cetaceans of seismic “pulses” —  220 decibel explosions fired every 10 seconds for four months by 36 or more air guns — “could include physiological injury, behavioural avoidance of seismic survey areas, masking of environmental sounds and communication and indirect impacts due to effects of prey”.

Big Oil has come to the Wild Coast. Shell has announced it will start a seismic survey in search of oil or gas deposits from Morgan Bay to Port St ...
News
7 months ago

Two sets of legal letters were being sent to government by the 29-member Oceans not Oil coalition, compiled by civil society and small fishers.

Ricky Stone, attorney at Cullinan & Associates in Cape Town, said a legal team had spent hours sifting through the authorisation, including the renewed exploration rights in 2018 when Shell appeared on the scene.

This had led them to a clear understanding of what had transpired and he believed they had a strong case for calling a halt to the blasting and drilling.

Legal senior counsel was being briefed and would be “seeking urgent recourse”.

Among their legal strategies was an approach to Creecy to urge her to invoke her powers in terms of the National Environmental Management Act (Nema), pending a full investigation.

Vocal and visual protests to Shell blasting off Wild Coast

The Wild and East Coast from Buffalo City Metro to Coffee Bay came alive at the weekend with protests against the 3D seismic blasting off the Wild ...
News
7 months ago

Creecy this week stuck to her position that she was powerless to intervene as the environmental authorisation in 2013 for the survey was the responsibility of minister Gwede Mantashe’s minerals & energy department.

She made no mention of the brewing inferno over the Wild Coast at her post-COP26 briefing on Wednesday.

Shell has consistently stated that its exploration right and environmental authorisation is legal and compliant.

Oceans not Oil co-founder Janet Solomon from Durban said networks were on fire in SA and around the world.

The petition had been viewed by 1.3-million people and shared 5,800 times on Facebook.

“The SA public understands the climate crisis. They have a sacred relationship with the sea. Shell and Mantashe stepped on a cobra when they started messing with the Wild Coast.”

The driving force, however, has been local people who started online groups and are reaching out to friends, people with influence — and Creecy herself.

“Go to court, I am not involved.” This was the essence of the response from forestry, fisheries & environment minister Barbara Creecy after 57,364 ...
News
7 months ago

A powerful protest video produced by Nahoon open swimmer and retired deaf SA international swimmer Mark Roach, 24, titled Save the Wild Coast, had 21,000 views on YouTube, 21,000 on Instagram, and 6,000 on Facebook.

The foundation of Lewis “Iceman” Pugh, the SA-UK polar endurance swimmer and ocean advocate, shared Roach’s video with his followers.

The north and south horns of the Wild Coast came together when the Amadiba Crisis Committee and the Wild Coast Holiday Association issued angry statements.

Leaders of the 45-member Wild Coast Holiday Association, which met on Monday, were unanimous in their horror at the looming fossil fuel search, leading member Richard Warren-Smith said.

He said they were looking at every avenue, including a legal challenge to what could be a devastating blow to the ancient lifestyle of the Wild Coast.

“Six generations or more of people have raised cattle, used the same streams. People’s lives have depended on fish, oysters, and crayfish.

“Now you annihilate 250km of pristine coastline. People here are the custodians of the coastline. That is why they stay here.”

Spokesperson for the veteran anti-mining Amadiba Crisis Committee Nonhle Mbuthuma said: “That blasting and drilling operation will destroy the ecosystem and marine life which is our livelihood in rural communities.

“We depend on the ocean for survival. The entire tourism sector will be destroyed.”

She said they feared that the blasting, which scientists say can be heard up to 4,000km away, could affect the migration of kingfish to only the Mtentu river to perform their “circle dance” and possibly to spawn.

“If the ocean is polluted by noise they might not come, nor will the tourists.”

Into this fury rides the ship Amazon Warrior. In 12 days the Shearwater oil-and-gas hunting vessel will arrive on the Wild Coast. It reaches Cape Town this weekend.

Nationally, the sailing community was gathering to stand in the way of the incoming survey vessel, and communities all along the SA coastline were rising up against Shell’s move, Solomon said.