#Zuma dominates social media for yet another year 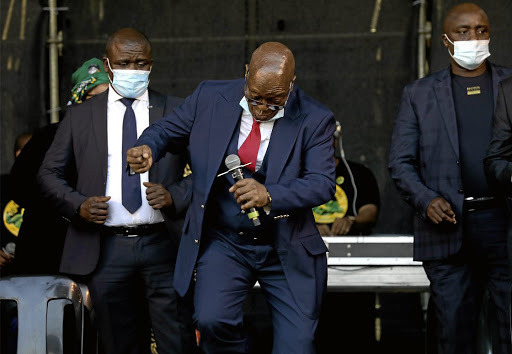 Three years after #ZumaMustFall was the biggest hashtag on social media, #Zuma and everything relating to him dominated Twitter this year. File photo.
Image: SANDILE NDLOVU

Former president Jacob Zuma is still the most talked about South African on social media.

Three years after #Zumamustfall was the biggest hashtag on social media, #Zuma and everything relating to him such as #ZumaTeaParties, #Nkandla, #Zondo, #ZumaArrest and #StateCapture dominated Twitter this year.

Analysing social media posts, Acumen Media said that conversations about Zuma on social media this year were on the same level as the #ZumaMustFall hashtag, which trended from 2016 to 2018.

The first trending hashtag of the year was #JacksonMthembu when the minister in the presidency died.

“That was our opening. While our country was being hammered by the #Covid19, big pharma held us ransom with #VaccineApartheid. We learnt many new words this year, most of them the Greek alphabet: #Delta, #Lamda #Omicron. We’ve been #LockedUp, #Curfewed, #Sanitised #Distanced #Insurrected and #Devastated. #Covid19 impacted every one of our lives in many different ways but so did a mutant even more vicious: #SAPolitics,” Khoury said.

The next big event that drove conversations on social media was the widespread looting and unrest that swept through KwaZulu-Natal and parts of Gauteng.

“July started with the eyes of the world on our legal system as the #ZumaJudgment was finally handed down by the highest court in the land. #uBaba was going to jail! Unbelievable, we thought, we were right it was unbelievable. We were told by #AndileLungisa that he would ‘shut down’ SA if #Zuma did fall,” Khoury said.

“The #Unrest was weird from the beginning. Though we understood the #looting, we didn’t understand the obliteration, and we most certainly did not understand why the targets included manufacturing houses, ports and factories. The Molotov cocktails were landing on the roofs but they were a little too well timed and aligned, and though something was off, we ran with it.

“We let the chaos envelop us and we crashed through a gushing volume of news and social media that seemed implausible and tore provinces to the ground.

“We stopped holding our breath for a minute when the army arrived. But we breathed in when something so much bigger arrived.

“Enter the key to each SA success story — #ubuntu. The realisation that looting would bring only more poverty, and that a feast today meant a famine tomorrow, #SARose and fought back.”

#Ramaphosa and #Insurrection then started to trend when President Cyril Ramaphosa addressed the nation on unrest.

“Ordinary South Africans were going through a transformation though. We learnt, very quickly, how to barricade and protect ourselves and our neighbours. Shoprite turned #CanolaOil into a very effective anti-looter mechanism. We also learnt that people can forward unverified voice notes and misinformation faster than you can bankrupt SAA. We watched people die,” Khoury said.

The hashtag #PhoenixMassacre then entered the social media space when 36 people were killed in Phoenix, north of Durban.

Madurai said mental health and gender-based violence were the two main emotional drivers of online discussions in SA this year.

“The huge rise in GBV is an awful black mark against our Covid-19 response, now being referred to as the ‘shadow pandemic’,” she said.

“Lockdowns impacted everyone’s state of mental health, whether directly or indirectly. Being ‘locked up’ had direct effects on our mental health, while our dismal economic circumstances have led to job losses, suicides, divorces and more, impacting the mental health status of South Africans, quite negatively.”

Usage of social media in SA increased by about 20%, added Madurai.

“Lockdowns increased usage and reliance on social media for connection and staying in touch with the rest of the world and happenings, as well as news and information.”