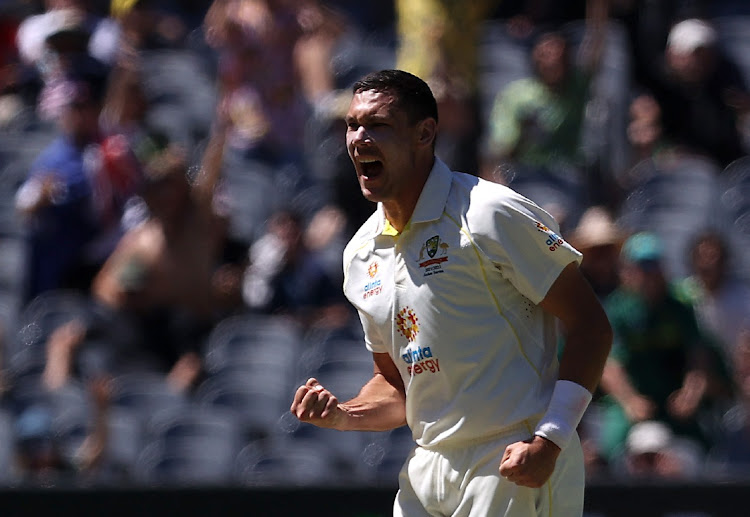 A sensational six-wicket innings haul on debut may not be enough to keep paceman Scott Boland in the Australian team, with regular seamer Josh Hazlewood set to return from a side strain for the fourth Ashes Test in Sydney next week.

Boland, who was plucked from obscurity by selectors on Christmas Eve, was Man of the Match in the third Test in Melbourne after finishing with astonishing figures of 6-7 from four overs as England capitulated for 68 in the second innings.

Selectors are blessed with an embarrassment of bowling riches, with first-choice seamer Hazlewood expected to be fit and Mitchell Starc unlikely to be rested after Australia's bowlers had a light workload at the Melbourne Cricket Ground, where they romped to an innings and 14-run victory.

Boland said he knows where he stands in the pecking order.

“I understand how selection works. I’m 32 so I’ve been around the block in terms of what happens with those things,” he told host broadcaster Seven Network.

“When you’ve got a guy like Josh Hazlewood coming back in, I don’t think I’m going to be standing in his way. He’ll be coming straight back in.”

India have trashed a woeful SA by 113 runs in the Boxing Day Test at SuperSport Park in Centurion.
Sport
6 months ago

Having waited until his thirties for a debut, Boland might have another long wait for his second Test with captain Pat Cummins, Starc and Hazlewood being nailed-on selections for years.

Should Boland miss out it would have echoes of Gillespie's omission from the side after scoring 201 as a nightwatchman and taking three wickets against Bangladesh in 2006 in his 71st Test.

Gillespie was Man of the Match but did not play another Test.

Seamer Jhye Richardson may also be available for selection after he missed Melbourne with a minor leg strain, having replaced Cummins in the second Test in Adelaide.

Proteas captain Dean Elgar has admitted that he and opening partner Aiden Markram need to take responsibility and start well in the New Year’s Day ...
Sport
6 months ago

With the series sealed 3-0 and the Sydney Cricket Ground pitch generally conducive to turn, Australia could hand leg-spinner Mitchell Swepson a debut in a dual spin attack with regular Nathan Lyon, which would further cramp space for fast bowlers.

“We'd love nothing more for (Swepson) to get an opportunity but it will probably be conditions-dependent,” he said.

“Obviously some hard conversations to be had at some stage.”