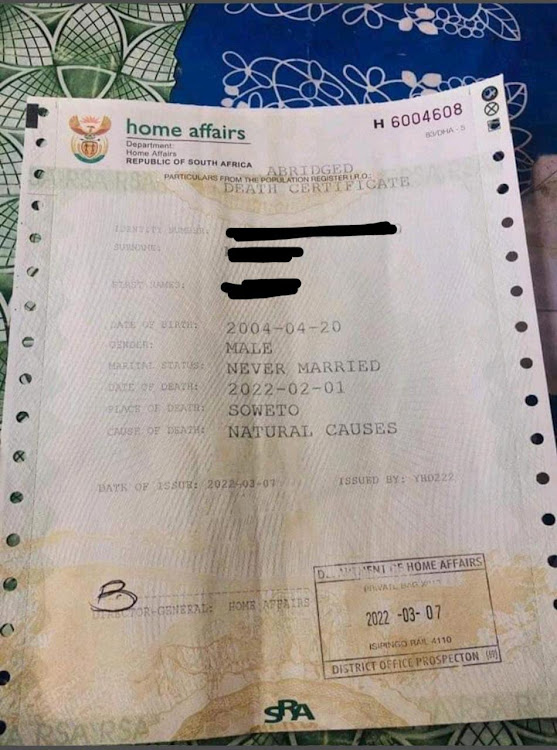 The death certificate stated that the schoolboy died of natural causes in Soweto.
Image: supplied

A matric pupil from Umlazi in KwaZulu-Natal who applied for an identity document in February was shocked to discover he had “died of natural causes” in another province.

The pupil applied for an ID at the department of home affairs office in Isipingo, south of Durban.

But when he went to fetch it in March, he was handed a death certificate instead.

It stated he had died of natural causes in Soweto, Gauteng.

A teacher posted on Facebook about his plight and efforts to rectify the error on Tuesday night.

“I am his teacher since grade 10. The boy is here. He is alive. He is learning on a daily basis, but this situation is so bad that I can see he is getting distracted from his books,” she wrote.

The family of the six-year-old boy who fell into a sewerage manhole on Sunday have been told by rescue divers to prepare for the worst.
News
3 weeks ago

She called on social media users to help the pupil get answers, as the home affairs department staff in Isipingo did not appear to be helpful.

The post was deleted on Wednesday morning. But less than 24 hours after the teacher flagged his plight on social media, the saga had a happy ending.

KwaZulu-Natal home affairs manager Cyril Mncwabe told TimesLIVE the error had been rectified and on Thursday the pupil had received his ID document.

• This article was updated on Thursday afternoon to reflect that the pupil had now received his ID document.